Given the well-publicized substance abuse struggles of a number of ballplayers (from Hamilton to Bush to Jenks) recently, I thought this tom would be appropriate.

Bernie Carbo was a 1st round pick (16th overall) in the 1965 draft. Playing for the Reds, he made the Bigs for good in 1970 and finished second in the ROY voting to Carl Morton. 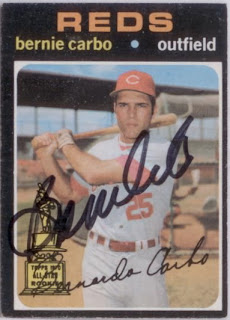 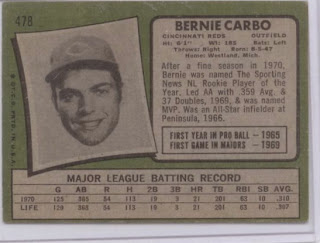 Despite his All-American appearance here, Carbo would go on to be guy who introduced Keith Hernandez to cocaine (see this article). That makes him, basically, the 1970s cocaine version of what José Canseco was to steroids in the 1990s. How bad was it? Carbo says he was high during the 1975 WS. I'd say that's pretty bad.
That said, Carbo eventually got clean and, apparently, has remained clean for almost 20 years. He even started his own ministry in 1993. Here's hoping some of the guys currently struggling with similar issues manage to get things turned around, if not for their careers then for themselves and their loved ones.
Have a good one everybody and goodnight Pumpsie Green, wherever you are!
Posted by Carl Crawford Cards at 8:00 AM