In 1955 Billy Klaus finished second in the ROY voting to phenom Herb Score and 13th in the MVP voting. With a lifetime slash line of .249/.351/.686 he never set the world afire, but he had a solid 11-year career, splitting time between the Braves, Sawx, and Phillies. He went on to play in Japan and manage in the minors. 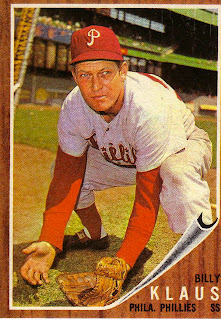 And man was he gritty. Have you ever seen a guy get so low while posing for a baseball card? Most guys are just posing, lounging about, going through the motions of getting on a baseball card, but Klaus obviously takes this pretty seriously. 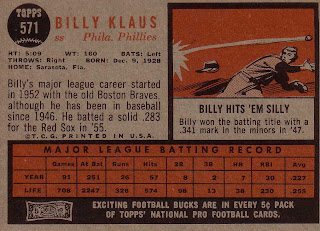 Then on the back we've got a mention of the minor league batting title he won in 1947. In other words, Topps went back TWO DECADES to pick out a career highlight to mention on the back of this card. Was that any way to pay Klaus back for his hard work on photo day? They would have never treated Eckstein like that.
Have a good one everybody and good night Pumpsie Green, wherever you are!
Posted by Carl Crawford Cards at 8:00 AM