Card Show Purchase #6: The One that Sent Me Back to the ATM

When I was a kid anything older than 1984 Topps was positively ancient. An older friend of a friend had a TON of ancient cards (pre-1984) and his 1977 Thurman Munson ruled them all. I guess it's because I was so young, but I never understood the big deal about the tragedy surrounding Munson until I was much older. That said, he's always held a special place in my collecting heart.

So: having made all my other purchases, I just happened to be perusing this other dealer's special "half-off original price, nothing over $5, everything comes in a screw-down case" box. I still can't believe it, but this was at the back of the box: 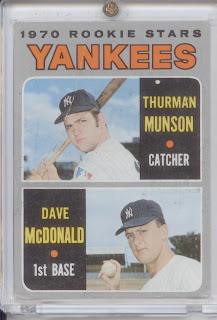 It's got more than a crease or two and the guy who sold it to me lamented that it was a "$100 card that was hardly worth anything" (whatever that means!), but I politely asked him to put the Munson aside while I ran to the ATM for reinforcements. 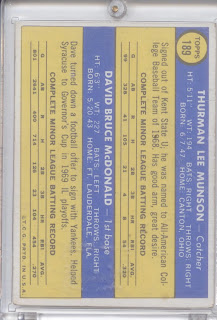 "Good arm, great desire." No truer words were ever written about Munson.
So, there you have it. If you are a condition guy my haul from the show is pretty substandard. Seeing as how I'm not a condition guy, this was the type of show I've been dreaming about since I got back into cards. Serendipity, great prices, great cards, pure awesome!
Have a good one everybody and goodnight Pumpsie Green, wherever you are!
Posted by Carl Crawford Cards at 8:00 AM