The EJ Collection Goes to 11: The 2005 Bowman Chrome Superfractor

I sold a few things on the 'bay recently and decided it was time to step out of my normal purchasing range. WAY out.


I'd been following the card for a while and the BIN on it was more than I wanted to pay. I was looking to get one of several cards and even though this buyer didn't have an OBO on it, I thought I'd drop him a  line. I offered, he countered, we agreed on a price.
Give it a few days and here it is: 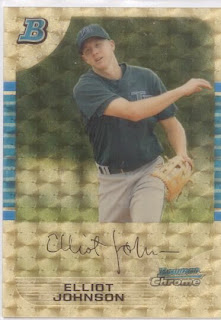 I'd never seen, much less held a superfractor in person before, and let me say that they are sweet. REALLY sweet.
I've stated before that I'm a HUGE EJ fan. This was only increased this past 4th of July, but that story will have to wait. Suffice it to say that he's a cool, down-to-earth guy and one of my favorite players of all-time. Hence the superfractor purchase. 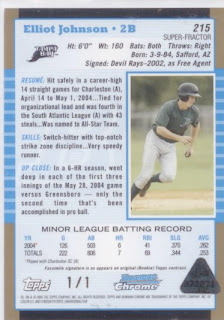 A 1/1, but look at that story. How many undrafted free agents make it so far as to have their own card, much less all the way to the show? He's a hell of a guy and a hell of a ballplayer. This is also a hell of a card.
So, keep an eye out in the next few days for some headhunting trade offers I'll be putting out. I'm obviously going after the 2005 Bowman EJ rainbow, as well as this year's 2011 Topps Update EJs. If you have any put them aside, it'll be worth your while!
Have a good one everybody and goodnight Pumpsie Green, wherever you are!
Have a good
Posted by Carl Crawford Cards at 8:00 AM