I'm going after the 2011 Topps Update EJ Rainbow. I was able to land the first two plates fairly easily but hit a snag with plat #3. As outlined here, Jim over at GRCL stepped up and took what I was offering in order to land the EJ. Thanks to Jim, here's 3/4 of the plate rainbow which, as a bonus, includes CC as a foreground lurker. Pretty serendipitous.

And then he included a TON of extra Rays, among them this gem of Fer Perez. 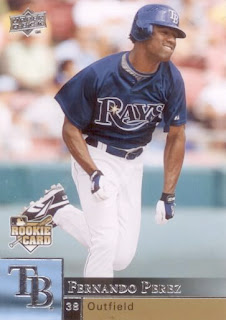 We lost Fer in the Matt Garza trade, he was later picked up by the Mets, and he was another ballplayer that the compa and I really enjoyed watching back in Durham. He's got a degree from Columbia and has even published in Poetry. A renaissance man, he's a great actor (seriously, check this out), maintains an active Twitter feed, and always has craziness up on Tumblr. A cool guy and a cool card. Compa is still devastated that we let him go!
Thanks again, GCRL!
Have a good one everybody and goodnight Pumpsie Green, wherever you are!
Posted by Carl Crawford Cards at 8:00 AM