Matt over at the Number 5 Type Collection had an awesome contest where if you guessed the cards, you won them. From the rubbings Matt posted I got that they were from the 1963 Bazooka All-Time Greats, but I still had to know who they were.

I guessed a Connie Mack was at stake and put my head on figuring out who the other guy was. In short, I won and landed these cards: 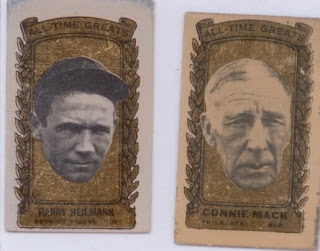 I'm a HUGE fan of the Connie Mack A's and am stoked to add this to my collection. Believe it or not, Mack is in the HOF despite losing more games than he won, a distinction he shares with Buck Harris. Hopefully one day Gene Mauch will join that club, but I digress. The really cool thing (actually about all three of them!) is that they were OK-but-not-great ballplayers who, despite their not-so-greatness, learned enough about the game they went on to become All-Time-Great managers. 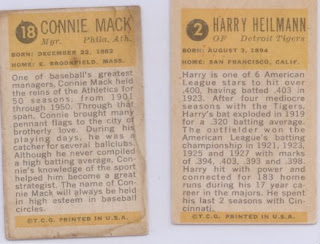 The other HOFer here is Harry Heilmann, nicknamed "Slug" (for his hitting prowess or blinding speed, who knows?). The awesome thing about this card is that I had no appreciation for Slug until looking up his stats: he hit .400 once and flirted with it several times, had a lifetime OBP of .411, and 183 HRs in the dead ball era which is even more impressive in the context of his OPS+ of 148.
After today's Lions game I may have to send Harry over to a certain Detroit fan I know to cheer him up!
Thanks again for the contest, Matt!
Have a good one everybody and goodnight Pumpsie Green, wherever you are!
Posted by Carl Crawford Cards at 8:00 AM