TTM from Gil Coan: OK for a Dook fan

One of the cooler things about the blogging community is the general willingness to help others out. Tom over at Baseball by the Letters posted a great success he'd had from NC-native Gil Coan and that piqued my interest in sending Mr. Coan a letter. No fear. After a brief email exchange Tom helped me out with the addy and, after some ebay magic, my letter was off to Mr. Coan. 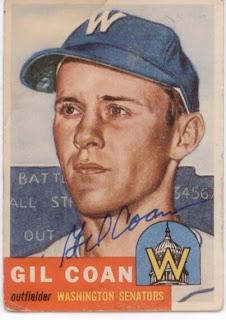 The '53s tend to be tough cards to fit signatures on if only because they're mostly close-up portraits. This card is even stranger because the background is a scoreboard with the writing clearly visible up behind the subject. All the same, Coan laid a nice sig on here.
Coan played 11 seasons in the majors from 1946-56, mostly with the Senators and New York Giants. I like reading about those Senators (guys like Cecil Travis, Buddy Lewis, Eddie Yost, Roy Sievers, etc.) and the fact that Coan was from NC was a huge bonus. He was even born in Monroe, right next door to Wingate University where, coincidentally, I started my college career. 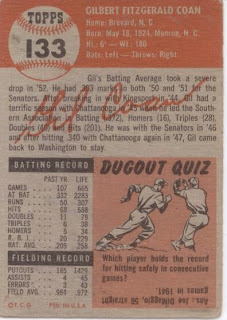 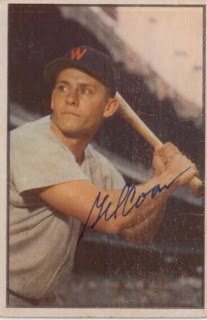 This 1953 Bowman color set me back a touch more than I would have liked, and I admittedly wasn't thinking to clearly in terms of "is this a card that is easily singable," but like a lot of former ballplayers Mr. Coan found the perfect (if only!) spot on the card where the signature would look good. 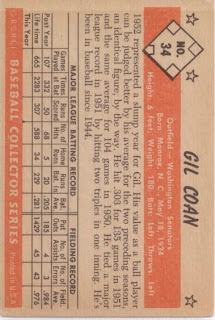 Mr. Coan even responded to my questions about his life in baseball. His favorite player when he was a kid was Dizzy Dean, and his best moment in the game was Opening Day 1946 when he took the field for the first time with the Senators at Old Yankee Stadium. Unless I'm mistaken, the card above is Yankee Stadium, too. Like a lot of guys from the 40s and 50s, the toughest pitcher he had to face was Bob Feller.
As for being from NC, he was pretty diplomatic when asked if he preferred Western-style (ketchup-based) or Eastern-style (vinegar-based) bbq. His answer: all of it.
As the title of the post suggests, he has a much clearer opinion of things when basketball season rolls around and cheers from Dook.
If you've never rear Tom's blog seriously, go check it out! His approach to ttm-ing is genuine and sincere, and I keep a lot of his advice in mind when thinking about sending someone a request. Thanks again, Tom!