For reasons not fit to publish anonymously on the inter-tubes I've been in-and-out lately, pretty turned around. Things are fine, it's most just the shock of working in a high-stress environment. There are several blogger emails I need to get to (I'm on it!), and things are so crazy I came back across the country but forgot the central card I was sending away in a massive trade with Scott Crawford. Ugh.

Over the summer I put together a 100-card 1970 Topps starter set at the local. I figured the commons were 20 cents per, roughly equal to what I could expect to swing on ebay, so I figured, "why not?" I threw down a little more on a few select cards I thought were cool, and got out of there for not too much over $25.

All of which brings me to this: 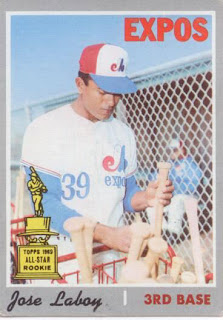 If you've never heard of him before, José "Coco" Laboy had a 5-year career in the majors, all with the now-defunct Montreal Expos, Requiescat in pace. In 1969 he finished second in the ROY voting to Ted Sizemore, with such awards generally being a sign that things are moving in the right direction.

Taking a step back from that, this remains one of the most poetic baseball card photos I've ever seen, on par with the greatest CC ever. Despite the auspicious start, Laboy remains trapped in the reality of being a 29 year-old rookie. He's not looking at the photographer, he's not even acknowledging us, as if he's all too conscious of how quickly seasons change, bats break, the balls stop finding holes or extra effort results in career-altering injury instead of a sharpening of one's skills and more success. 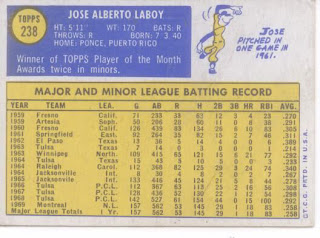 And it's not as if his extensive minor league experience outlines a player undeserving of a shot in the Majors. And yet a career that began in 1959 wouldn't lead him to the majors until 10 years later. He was plagued by injuries, was solid yet unspectacular, and then when he finally got his chance was betrayed by his body one last time. And already, on the front of his 1970 Topps card, he is a man afraid to stare too hard into the future, looking instead into the uncertainties of the bat rack and the day's game, knowing that the individual pitches, at-bats, and days are faced in isolation, alone. With or without the roar of the crowd, Coco Laboy embodies life's apprehensions for all of us, the sic transit gloria fugit we  continually defer in our daily activities.

Have a great one everybody and goodnight Pumpsie Green, wherever you are!