there will never be another like Denny McClain---Ernie Harwell

Over the summer Denny McClain made a stop at a Chas Riverdogs game to sign and sell copies of his new book, I Told You I Wasn't Perfect. I'll review the book later on. McClain seemed like a nice enough guy, but the book really complicated that picture. At any rate, let's say I did a lot more reading about him this summer than I otherwise would have. The night of the game I was simply excited to meet the game's last 30-game winner with my dad, who reared me on stories of McClain's '68 season. Somehow the quick flameout thereafter never came up, but I digress. 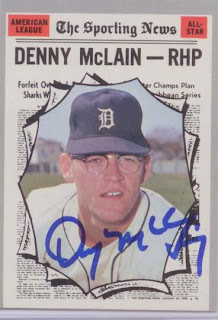 I had to place an emergency COMC order to land this card since I called virtually every card shop in driving distance that I knew of and all of them said they had no Denny McClain cards. I then took a trip to the local (30 minutes away!) and, lo and behold, there were a few of these hiding out. I ended up with 4 of them and gave some away to the kids with me in line who had no McClain cards. Anyway, it's a great 1970 addition to  my Topps All-Time Project. 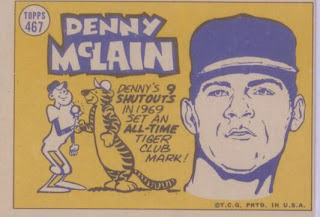 McClain was sensational back in the day, something that gets overshadowed by the 30-game-winner memory and, well, lots of other things. 9 Shutouts is insane.

Posted by Carl Crawford Cards at 7:52 AM