That's My Boo: TTM from Down South

I've been saving this one for awhile, a ttm from Mr. Boo Ferriss. I watched for '49 Ferriss cards on ebay for a few months, but they were all prohibitively expensive. Then an internet search turned up this card and a several other fairly priced cards at Old Vintage Cards, so I pulled the trigger. 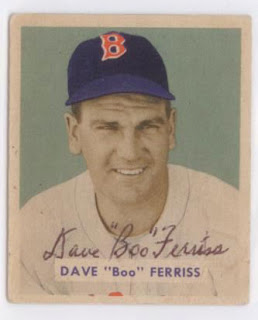 For those of you unfamiliar with Boo Ferriss, his first two years in the majors (1945 and '46) were perhaps the strongest start ever by a pitcher as he compiled a 46-16 record. That's NOT a typo, I said 46-16. He was an AS, an MVP candidate, even a solid hitter, but then a "shoulder twinge" essentially ended his playing days. Just like that, it was over. 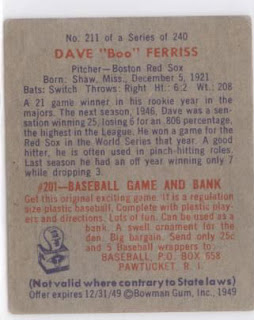 In his book (a good read), Ferriss states that an MRI he had later in life revealed he had a torn labrum. In other words, 1940s medical technology couldn't help what today is a routine injury. Not that the injury dampened his career in baseball or his life. On the contrary, Mr. Ferriss went on to become a legendary collegiate coach at Delta State University in Mississippi, and in the intro to Ferriss's book Delta State alum John Grisham (yes, THAT John Grisham) details how Ferriss "kindly" cut him from the Delta State baseball team long, long ago.

Mr. Ferriss is a prolific writer and responded to my questions. His love of the game at all levels comes through in his correspondence.