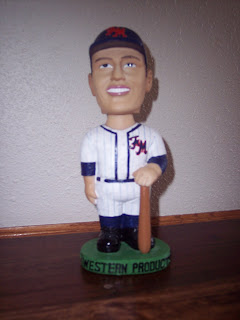 One of the cultural events of the town I just moved to is the yard sale. I know, they have yard sales everywhere. However, I am willing to bet that their are more yard sales per capita in the upper midwest, and that most yard sales in the US are run by folks who themselves are transplants from this area. So, when I say that they are a cultural event I mean that seriously, as in today there were no less than 10 yard sales within walking distance of my house and that, in a town with a population no greater than 50,000, there were at least 100 yard sales.
Like everywhere else these things are a mixed bag given that most people are only willing to sell stuff they no longer need or no longer want. To my surprise someone was willing to part with the bobblehead at right for fairly cheap ($5). As they say, "I don't do bobbleheads," but this one gave me pause.
Roger Maris is from Fargo, ND, right near where 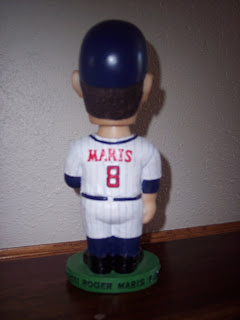 I live, and folks up here are rightly proud of the guy who broke the Babe's single season HR record. Originally drafted by Cleveland, he played a short-time for his hometown club and the Indians' C farm team, the Fargo-Moorhead Twins of the Northern League.
Today Fargo-Moorhead has an independent team, the Redhawks, and this bobblehead was a stadium giveaway in 2002. Roger sports his hometown F-M Twins uniform and looks every bit the midwestern boy.
He was a great player, though perhaps not HOF great, and even in the '61 season when he broke the Babe's record a lot of people felt that Mantle, the golden boy and mid-century Mr. Yankee, should have been the one to break it. Maris really never got his due in his own lifetime, as evidenced by the asterisk that accompanied his breaking of the record (Babe hit 60 HR in 1927 during a 154 game season, Maris hit 61 in a 162 game season). When you think that Ford Frick put an asterisk next to Maris's mark for having had the misfortune of playing a longer schedule than the Babe, can you really make a solid case for Bud Selig looking the other way during the era of McGwire and Bonds?
Anyway, when I was looking to move for work one of the things I was most excited about was moving to an area with an MLB team. As it turns out, the closest team to me right now is 5+ hours away and there is no minor league ball up the street as there was in NC.
Despite being almost 1700 miles away from where he had his finest moments as a player, it's pretty awesome to think that the the folks in Fargo-Moorhead have maintained an intense connection with Maris. We have this Redhawks's giveaway (team site here), the Roger Maris Museum, and of course the gravesite. All cool stuff and proof, I guess, that baseball's always out there, you just have to look for it. I may not live near an MLB team like I had envisioned, but I call Roger Maris's state home and that, I think, is pretty awesome.
Posted by Carl Crawford Cards at 2:27 PM