Like everyone, I've got a lot to be thankful for. I'm in Iowa, with the compa's family, who was gracious enough to delay Turkey Day until Friday so we could be here and share it with them.
I've got a lot to be thankful for. Aside from being ill as a dog after dinner yesterday (I blame my mother-in-law), I've got my health. Despite my considerable eccentricities I have the compa. I'm also employed in a great job, which in this day and age is no mean accomplishment in higher education. I'm thankful for
I'm thankful I'm NOT a Cubs fan. Cubs fans have it tougher than most, and I don't think the rest of us appreciate that. Compa's grand dad was a Cubs fan, which gave Daddy D a permanent leg up in family arguments. Think Zim is happy to be a Cub in 1961? This might be the only card in existence where Zim isn't smiling. In fact, he looks depressed. 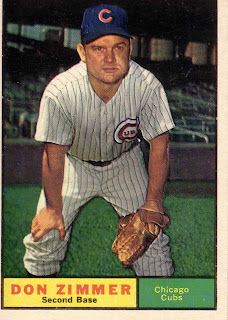 Willie Jones doesn't look much happier, but I'm guessing he's just happy to have a job. "Puddin' Head" Jones played most of his career with the Fightin's before traveling around a bit on his way to Cincy. He's also from Dillon, SC. Apparently he was, like me, thankful to be FROM SC as opposed to be living IN SC, as he lived out his days in OH. 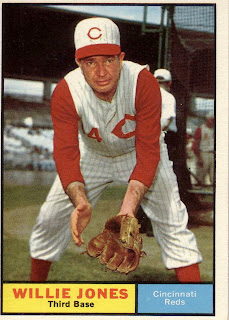 And finally, I'm thankful for all my great friends past, present, and bloggered. Without you life wouldn't be nearly so interesting, and there'd certainly be no binge-drinking fueled trips to Jerusalem. Hopefully we'll all get there one day. 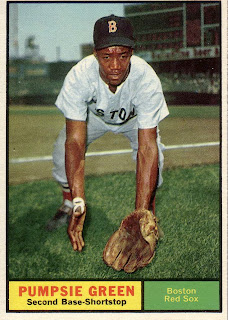 Thanks to Daddy D for the '61s, and have a good one Pumpsie Green, wherever you are!
Posted by Carl Crawford Cards at 5:44 PM