A while back I'd gotten news of a mid-70's 3D Vida Blue being available...after some correspondence with Captain Canuck over at Waxaholic, the card has arrived. Check this out: 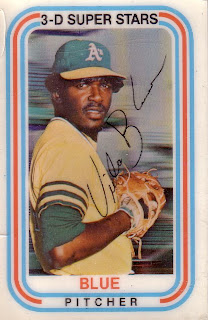 This card is one of the straight up gems of my Blue collection, which I'll try to get up ASAP. The scan of the card completely flattens out the technology here, so you're not going to get a good sense of what this looks like in person. For starters, the background is awesome, a really well done, interesting shot of the stadium behind Blue. There's no one else there, and the park is empty. We get the foul pole marking the distance out towards where there's a break in the out bowl and we get nothing but sky beyond, all of which conspires to make Blue loom that much larger in the foreground. And let's not forget: back in the day, Blue was HUGE. Even though his career was derailed by drug abuse, he was an effective pitcher until he retired.
Other Blues: a 1986 Topps. 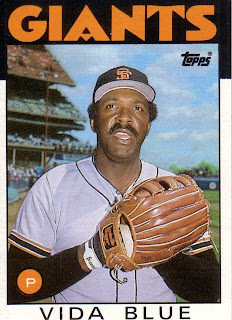 It's almost like an update of the card above, but without the other half of the stadium behind him on the right the card doesn't have the same imposing feel as the one above. Here Blue's coming off and 8-8, 4.47 ERA season, which is nowhere near as imposing as the kind of nasty stuff he brought in the early-mid 1970's. However, seems like a 4.47 ERA these days will get you CY Young consideration in the AL, so I guess it's not that bad. Still, even the man himself isn't quite as intense. Blue at twilight.
But then the following year we had this: 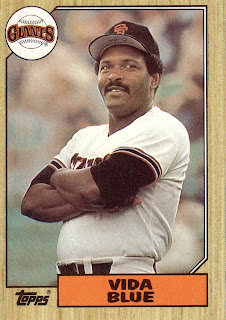 No glove, no other accouterments of baseball, just Blue in his Giants uni, arms crossed, looking rather self-satisfied. And why not? In '86 he went 10-10 with a 3.27 ERA, a nice bounce back season after the previous year. I read that he went into retirement only because he'd tested positive for drug use, and rather than face a suspension and the disgrace that goes with such things decided to go away quietly. Now, coming off a year like he had in '86 it's obvious that he still had something left in the tank. Compared to some of the users out there today....make of that what you will.
Then we have a Fleer sticker of Msr. Blue: 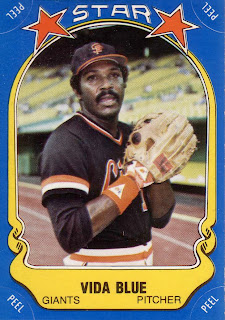 This card is awesome. It screams 1980s, big hair, and sweatbands the size of one's forearms. It make the glove look almost like a giant, oversized plastic prop, or something off of photoshop disasters.
And finally, a 1980 BK card. 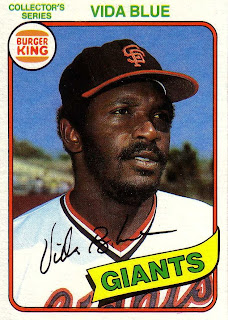 Gotta score the regular Topps for comparison, but I'll start by saying that if BK still did old school baseball cards they'd get more of my money. As in, I'd eat there, which is something I haven't done since...well...about 1980. This has to be a spring training portrait, but it looks like he's in CO or something with huge, rolling hills in the background. All in all a solid card, especially for a collaboration between burger people and Topps. And nothing like BK's later efforts, which are a sad, pale rendition of what could have been.
Thanks again for the Blues, Captain! Hope you enjoyed the Braves I sent.
Have a good one everybody and good night Pumpsie Green, whever you are!
Posted by Carl Crawford Cards at 6:59 PM