BB Reference lists Bobby G. Smith as an "Outfielder and Pinch Hitter," which I'm guessing translates as "Have Bat, Will Travel." Smith had a seven year career in the bigs, from '57-'62 in the NL, with another stint in '65 with the Angels. 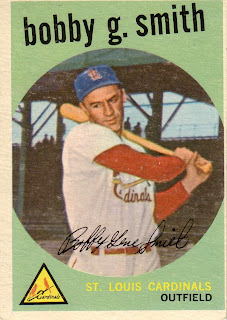 This is one of those cards that has really drawn me in since I pulled it from Daddy D's vault at Christmas. My initial thought was "Bobby G. Smith---he was one of the guys in the original Backstreet Boys, right?" "Bobby Smith" is completely anonymous but "Bobby G. Smith" has golden pipes, several Grammies to his credit, and has since gone on to a solo career. Looking over the card more and more, though, it's pretty cool.
For starters, it's another of the '59s that looks painted as opposed to being a straight photo. Anyone know why Topps did that? I'm also a big fan of cards with empty stands in general, and save for a few fans (are they turned looking out of the park or are they looking down onto the field?) we're all alone here. And then there's Smith, giving us one of those classic disinterested ballplayer posed swings you find on baseball cards going back to at least the t206 sets.
And then we have Smith. Career-wise he was solid enough but looks to have been primarily a pinch hitter, so that skews the numbers a bit. His best year was 1960 with the Phils, when it looks like he had a platoon gig or was maybe filling in for an injury. Otherwise in most years he only has a few more PAs than games played, which I take to mean he generally pinch hit and little else. 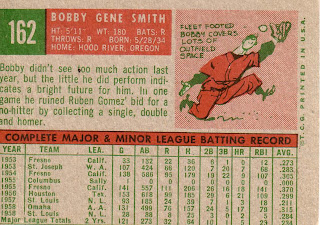 And you gotta love the Topps cartoon here. "Fleet footed"? Dude was 5-14 lifetime in SB attempts. Maybe he was faster in the OF, but that's not the raw material of "fleetness."
The coolest thing about Smith, though, was a tidbit I picked up on SCF. Seems Smith did a ttm for a dude and not only returned in w/in a week (very cool) but he also sent the guy his $5 back. I have no problem with guys who charge for autos, but that's an awesome gesture on Smith's part nonetheless. Think I'll have to drop him a line.
Have a good one everybody and goodnight Pumpsie Green, wherever you are!
Posted by Carl Crawford Cards at 8:00 AM