First don't forget the up coming 5-box Ginter break! We've got the Pirates and Giants left. Leave a comment or drop me a line if you are interested.
Next, gotta give credit where credit is due on this one to zman over at Autographed Cards, with some indirect credit to dayf the Cardboard Junkie. See, it's like this:
Zman posted about how his oldest ttm card was an awesome 1949 Bowman Lou Brissie. A friend of his promptly hooked him up with a PSA certified 1940 Play Ball autographed card of "Suitcase Seeds." Check out his blog. Both cards are AMAZING.
At some point later dayf posted about having scored a 1940 Play Ball Eddie Joost. In a DOLLAR box or some such. I still can't believe it.
THEN, zman had a really cool post about a 1952 Topps ttm he did to Mr. Joost with a card that, among other things, had a coke stain.
I put these strands together and realized: one might possibly try a ttm to Mr. Joost with a 70 year old card. When I got home this was in the mailbox: 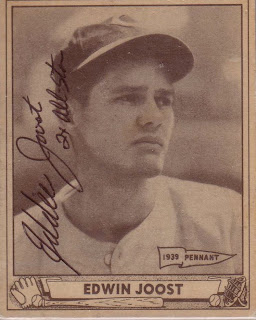 That is some impressive penmanship, and I really love the "2x All Star" inscription.
Joost was a batter with a tremendous eye and, until the steroid era and the advent of Barry Bonds, owned  one of the top-10 all-time seasons in walks (149 in 1949). And that was no fluke. Dude could draw a TON of walks. For example: in 1950 his BA was a pedestrian .233 while his OBP was .373, a difference of 140 points! That all-time great good.

His career spanned 1936-1955, during which time he was in and out of the Majors. He credits his last surge (beginning in 1947) with being given another shot by the great Connie Mack.

Thanks to Mr. Joost for the great sig and to zman and dayf for the inspiration.