Seeing as how Mr. Irvin was honored by the Giants yesterday by having his number retired (hat tip to A Giant Blog), I thought I'd post this card that popped up in the mailbox. 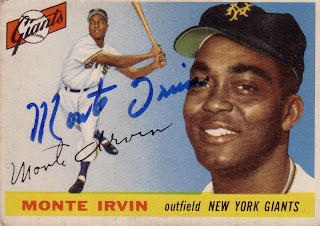 1955 Topps ttm courtesy of the man himself. I'm not sure when it showed up (hey, I've been out of the country) but was pretty stoked to get the SASE from Texas.
Monford Merrill "Monte" Irvin was a beast at the plate in the Negro, Mexican, and Major Leagues. How much so? According to BB Reference his moniker was "Mr. Murder." Ballplayer nicknames are usually cuddly, like "The Say 'Hey' Kid," "Hammerin' Hank," or "Kung Fu Panda," Irvin's being called something akin to a mafia hit man is pretty surprising. A lifetime OPS+ of .858 in the Majors gets you noticed I guessed. Congrats on having your number retired Mr. Irvin, and thanks for the auto!
I'm back for a while, so the posts will start rolling out beginning today.

Have a good one everybody and goodnight Pumpsie Green, wherever you are!
Posted by Carl Crawford Cards at 9:56 AM