Give me some wood...

and I'll build you a cabinet. (thx Beasties)

There's a funny story behind this card's winding its way into my collection.

A while back reader Joe (who is a prolific trader all across the blogosphere) sent me the CC cabinet card featured here. Again, that thing was stunning. So, after having received that card I remembered that there was a CC cabinet relic/auto out there numbered rather highly that would make a nice addition.

After some waiting one showed up on ebay. I had a number in mind, I was confident. Bidding was down to the final 10 seconds, steady at about $12, I was ready to pull the trigger...when I noticed the seller's handle was something like "BeckPalin2012." Politics aside, I couldn't bring myself to throw in knowing that maybe, just maybe, some of that cash would go to support a cause I'm just not in to.

Anyway, the auction stayed at $12 and I was bummed. Fast forward to a month ago when after some more ebay stalking, this showed up on my doorstep. CC prices have gone WAY out of the normal range since his signing with the Sawx, but this only set me back about $20. AND while I'll never know if the extra $8 I spent went to a political cause I don't agree with, at least I know the seller had enough sense to keep that junk out of peoples' faces.

Here's the card, and it's awesome: 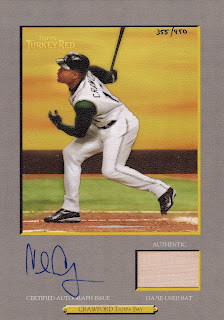 Good night Pumpsie Green, wherever you are!
Posted by Carl Crawford Cards at 11:21 AM