Who is Terry Crowley?

As I've stated on here several times, I'm a BIG fan of 1973 Topps photography. This Terry Crowley is no exception. 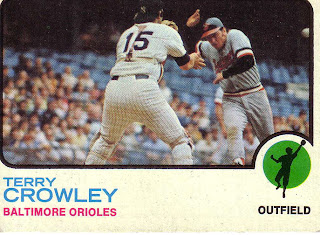 Where can I begin?
As his lifetime # of SBs (3!) might indicate, Terry's not the fastest guy in the world, and here we have him lumbering home, preparing to take out none other than Thurman Munson. Unlike a lot of play at the plate cards where the runner looks decidedly more heroic sliding in to home or colliding with the catcher,   we've got the awkward moment before these things come together. Crowley almost looks like he's shuddering in anticipation of being hit by the ball coming into the frame at the right. Is he out? Is he safe? I'm sure the intertoobs has it recorded somewhere, but I like this moment, the moment before it all comes together, almost signaling that the process is more important than the result, the part-time OF and the would-be HOF catcher caught in mid-action.
And then we have the composition of the photo itself: if I cut out the name would you even know which player was the subject of the card? Munson dominates the center of the your attention and we, like the fans we are, have to gaze in at Crowley over Munson's right shoulder. We're also waiting for the ball, waiting for the runner, waiting to find out when the h#ll Terry Crowley, pinch hitter, RF, and 1B, will arrive at the plate.
And then there's the semi-empty Yankee Stadium looming in the background. One of the enduring Yankee memes out there right now is that not only are the Yankees the greatest team on the planet, but that Yankees fans are also, by definition, the best. It is an unbroken tradition of greatness. One which, apparently, includes periods when "the greatest fans in the world" couldn't sell out Yankee Stadium when the Bombers took on the O's one afternoon in 1972. In other words, despite what ESPN would have you believe, Yankees fans are every bit as fickle as Pirates fans or any other fan base. I'm just saying.
Have a good one everybody and goodnight Pumpsie Green, wherever you are!
Posted by Carl Crawford Cards at 8:00 AM