Well, it's been a heck of year. As I write this snow is pouring down in my town. We were supposed to go to a NYE party tonight but compa has put the kibosh on that. Nothing to do but ebay binge, blog, and reminisce.

The year had it's good (Rays win the AL East), bad (Rays lose to the Rangers), and ugly (Rays lose Peña and CC to free agency). There were some personal milestones, also a mixed bag. For the first time in a LONG time I didn't make it to a game this summer, major league or otherwise, and that won't happen this year. Hopefully.

In a nod to the Rangers' victory of the Rays, here is a pensive looking Ranger I grabbed from a vintage commons box for 20 cents. Gotta love those things. 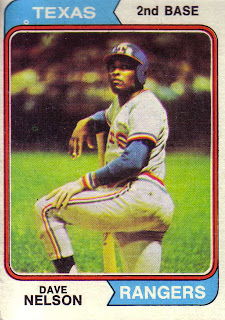 Here we have Dave Nelson kneeling in the on deck circle, looking back up past the stadium and into the night. He's coming off of his two finest seasons during which he stole over 90 bases and made the AS team in 1973. In these seasons he played in more games and established or came close to careers highs in almost every meaningful offensive category (SB, AVG, OBP, SLG, HR, 2B, 3B, H). His star didn't continue to rise, however, as his production quickly fell off and his playing days were over a scant four years later.

In a lot of ways this card speaks to the old "baseball as metaphor for life" cliché a lot of us point to when discussing our love of the game. Nelson, waiting his turn at bat, turning for a moment to the heavens. We have the bright promise of playing career on the rise that, seen from today, has already peaked.

Today Dave broadcasts for the Brewers, working alongside Bob Uecker. I'm sure that's hardly the future he was pondering when this photo was taken in 1973, but I'm also sure he has no complaints about how things shook out.

This is just a meandering way of saying a Happy New Year! Many thanks to everyone in the blogging community and beyond. Who knows what the future holds, but here's to a great 2011!

Good night Pumpsie Green, wherever you are!
Posted by Carl Crawford Cards at 6:45 AM