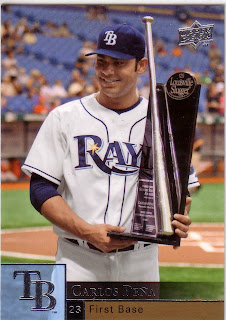 So, I was corresponding with Troll a couple of weeks ago when the compa says, "Ask him if he has any Peña doubles." Which I did. To which Troll responded with an insanely generous number of cards, most of which were no doubles at all but straight from the private stock. 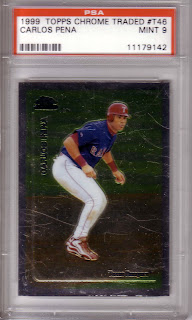 Yep, that's a PSA 9 Topps Chrome RC of the gent in question. But why, you ask, does the compa like Peña? Well, two reasons, both of then coming out of a trip we took to Baltimore for a day-night doubleheader late last summer. Peña plays first, and I sprung the cash for us to sit second row from the field for the games, which is a lot cheaper than you'd think given it was Camden yards.
First thing the compa notices? Peña has a great a$$. That was the one thing she thought was absent from the tremendous cards Troll sent: no shot of Peña's backside. She loves, however, this heroic looking Peña. First question she asks: why'd he drop the bat? 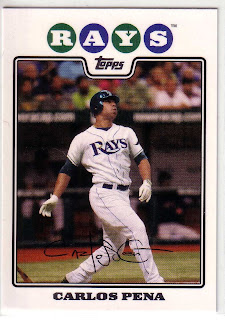 The second thing: the day after we were at the inner harbor talking to a guy who runs a t-shirt shot there. He told us this great story about how Peña had been talking to some folks who ran a restaurant around those parts, and later returned to their place with a bunch of Rays swag and tickets to the games. Pretty awesome guy, and the kind of story that needs to be publicized a lot more. 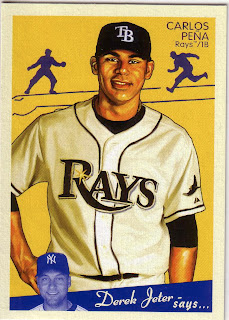 She looks at this card. It's got the smile, the pose, and...Derek Jeter? Compa: "Why in the *&^% do we have a Yanki on a Rays card?" I tried explaining about the neo-vintage craze, and Gehrig on the original Goudey cards, but she wouldn't relent. A lot of what she said wasn't fit for print, but can be summed up as "Tell these Upper Deck people that only Yanki fans would dig something like that. I don't want Captain Intangibles on my Peña cards, or any Rays cards! It ruins his smile." Message sent. 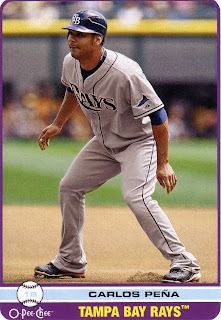 Check out that expression. Why compa digs it: "He looks cute and goofy running the bases. I guess that's why he's a god of the Three True Outcomes. That way 2/3 of the time he doesn't have to mess with this, but he'll still take a walk just to make the pitcher look bad." In her defense, this year Peña has more homers than singles. It's a fact. 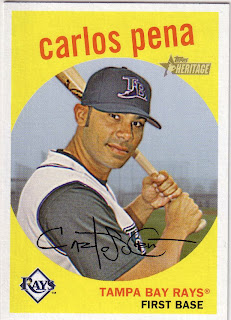 And these are just a few of the awesome cards the generous Troll who lives in Tampa sent to the Compa! Thanks again!
Posted by Carl Crawford Cards at 8:23 PM