Lamar the Giant Has a Posse 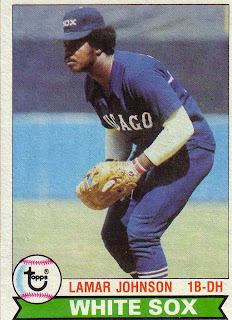 What I really find appealing here (aside from the awesome ugly White Sox PJs Lamar is sporting) is the unity between the card and the subject, how at first glance you almost think Johnson is hunched over, trying to fit onto a card that's just a bit too small for him. And, in a nutshell, isn't that pretty much the essence of card collecting, this notion that there's something a lot greater than the actual cards captured by the little squares of cardboard we shell out all the money for? This card actually gives the 6'2" Johnson the larger-than-life quality we all attribute to ballplayers. It's a strange, beautiful shot. 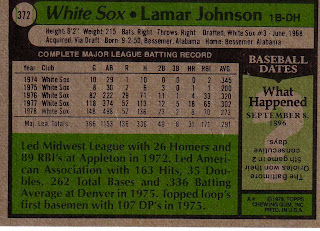 Johnson had a solid, slight above average career (109 OPS+) that lasted nine seasons for the White Sox and Rangers. Wikipedia claims Johnson sang the national anthem before a game in 1977, but Wikipedia says a lot of things. He's currently the Mets minor league hitting coordinator, though given that farm system I imagine that might be like saying "I'm the guy on the Titanic responsible for training the people in charge of navigation." Still, I hope he can help the Metropolitans get things turned around.
Have a good one everybody and good night Pumpsie Green, wherever you are!
Posted by Carl Crawford Cards at 8:00 AM