Yet Another 2011 Topps Post: In Praise of the Photography

Compa is laid up with a neck cramp which means I was flying solo to the Target for groceries. Of course I swung by the card aisle and you can guess what happened next.

In the meantime: anyone else notice Topps REALLY stepped up its game this year, photowise? 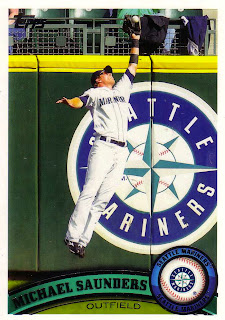 Oh man, this card is nice. It's not just the great "OF stealing a HR" shot, either. We've got the empty seats, the sweatshirts hanging over the rail, the OF suspended in the air about to crash into the team logo. And Saunders is a young OF cutting his teeth on a team trying to find its way.  Is there any better summary of Mariner baseball at this moment, from the franchise in transition to the hope of its minor league prospects, than this card? It's gotta be one of the best cards I've seen in a while, and I pulled several cards in ONE AFTERNOON I like as much as this one. Well done, Topps!
I like the photography so much I might even consider collecting this set. ("Might" being the key word, of course.)
Have a good one everybody and goodnight Pumpsie Green, wherever you are!
Posted by Carl Crawford Cards at 8:00 AM