He's my brother and all: TTM from the O'Briens

While I was researching 1953 Pirates to send ttms to I came across Eddie and Johnny O'Brien. Other than being the first twins to play in an MLB game for the same team in the same game, the two also managed to lead their university basketball squad to a victory over the Harlem Globetrotters in 1952.  That's a pretty awesome feat in itself. 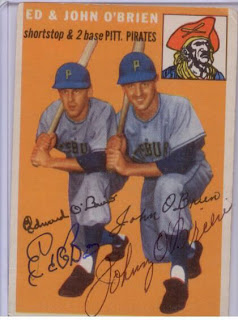 I remember the 2003 Heritage set had a Joe/Jake Mauer card, and I'm guessing it was based on this one. In addition to the '53, I sent this fellow to tag along. There's a lot that's cool here: twins, a double-play combo, the old-school Pirate, the double sigs, the long, looping "E" in "Ed."

It was my first "double auto," and thanks to Mssrs. O'Brien it turned out really well. Thank you, sirs!

Hava a good one everybody and goodnight Pumpsie Green, wherever you are!