Trying not to think about one of my favorite Rays getting DFA'ed, so we're going in a different direction.

I've always enjoyed posts where the author looks at a card and tries to figure out the game, time, and place where a given picture was taken. The games usually turn out to be a random Tuesday in June, but its a fun exercise to break the frame of the card itself and consider it as a snapshot, not of a season or a particular player, but of a precise moment in time.

If you are a Rays fan, you'll recognize this card and this moment in time immediately: 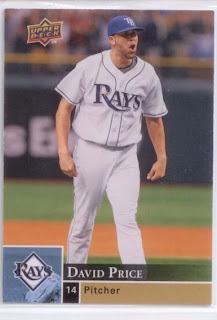 This unflattering portrait is the moment after David Price slammed his glove to the down after getting Jed Lowrie ground into the third out of the 9th in the 2008 ALCS.

It's a strange card insofar as the moment depicted overtakes the player represented in importance. To "get" the card you have to know it's that particular moment, that Price came on in relief in the 8th with the bases loaded and overpowered JD Drew, then in the ninth walked Jason Bay before smoking Mark Kotsay and Jason Varitek and inducing the series-clinching grounder. You have to know the Rays up until that point had pretty much stunk, and that this marked the moment they really arrived as the RAYS that everyone talks about as one of the better run franchises in the game. In a way, it bookends the cards here, where EJ runs into Cervelli and sets into motion all of the Spring Brawls that show the Rays aren't going to be pushed around any more.

After 3 years the price on this came down enough (it's an alternate photo SP) I was able to score one without breaking the bank. It's like a little piece of Rays history.