Some ttm love on a Monday.

I'm still working on the Topps Rookie Cups project, and recently heard back from 1973's entrant, Jack Brohamer. What's NOT to love about this card? 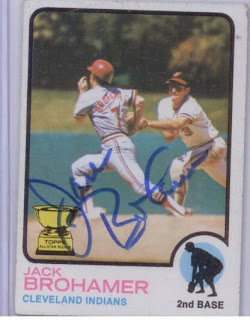 Where to begin? In classic 1973-style, you have to think for a second before you can identify the subject of the card as both men are given equal space in the shot. Oddly, Brohamer is recognizable only by the vague lettering of his jersey and the colors of his uni. As cards go, he's more anonymous that the other guy, whom I'm assuming to be Bobby Grich from the 1972 O's roster at Baseball Almanac. Comparatively, Grich is making a great play to nab Brohamer who looks caught out in "Rookie Screwed Up No Man's Land" near 2B, almost like he is an intruding presence on his own baseball card. As portraits go it's a strange and awkwardly painful askance view of a subject. 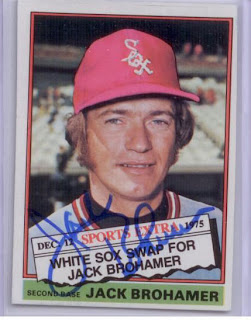 The above '76 came courtesy of the Night Owl and finished off my set. I sent it to Mr. Brohamer without realizing I left him almost nothing to work will all told, I think it turned out well. Thanks, Mr. Brohamer!


Posted by Carl Crawford Cards at 8:00 AM