It's finally Friday and I'm finally turning back to Twinsfest. First, 1,000,000 thanks to dayf, Doug, Scott, and Darren for the recent trades. You guys rock, and I'm getting ever closer to finishing another set this year. As a kid I always came really close but could never get those last few cards. For some reason working on 30-year-old sets is a lot easier.

My stated Twinsfest goals were to get Twins HOFers Bert Blyleven and Rod Carew. Everything else, I decided, would be gravy. I missed out on Killebrew a few years ago, and wasn't going to let this particular opportunity pass me by, so I downloaded the Twinsfest auto schedule, reached out to bloggers who'd been there before, and strategized.

What I came up with was simple"

1) Get there right when the doors open. On the one hand it was cold last Saturday. On the other, wristbands for Justin Morneau autos were going to be given out first thing, and they would be the big draw for most folks.

2) Be cool waiting. Having seen the lines at the now-defunct Twins auto thingy a few years back, willingness to wait in line up front actually frees you up to get autos once you are through the line. You also guarantee you get the autos you want.

3) Notice when players are scheduled against each other. On Saturday this Bert versus wristbands and, if I remember correctly, Carew versus Mauer. In short, the stars were aligned for Saturday to be THE good day to get both in one fell swoop.

That was about it, and that was all I needed. 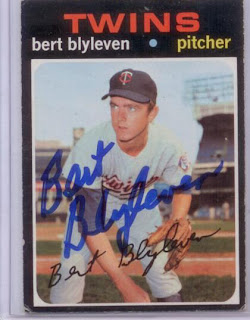 The Bert line was only about 20 deep when I showed up. As predicted, everyone went straight for the wristbands. Each to their own, right?

Meeting Bert was fantastic. The coolest part was I got to tell him the story of this card. When I was a kid in SC I once spent three days working in this guys yard in the 1000-degree heat cutting grass, trimming bushes, cleaning ditches, you name it. Before we'd started he'd made me an indecent proposal: cash or vintage cards. This was pre-Internet, and I'd never seen anything like the cardboard he pulled out. This was probably about '86 or so, Bert was on the downswing of his career and considered maybe HOFer. He pulled out this card, among others. At any rate once this this card was in the "you could own this in exchange for work" pile, I was IN. My parents, of course, were appalled, and today the card that "cost" me $50 in labor can be had for a pittance on eBay, but so what? 26 years or so later, I got to tell that to Bert AND he signed the card. 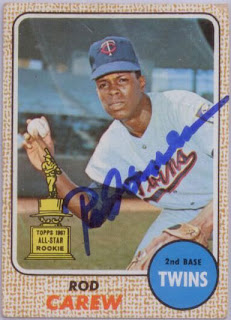 Rod here is much less dramatic. I wanted an awesome card for him to sign, grabbed this on the aforementioned eBay, and headed to the Cities. Truth be told, it narrowly won out of his '79 Topps issue in which his displaying that classic Rod Carew stance, but this is a damn fine card.

Having gotten Bert early, I basically messed around for almost 4 hours until it was Carew time (more on that in a moment). And by that I mean, time to line up 1 and 1/2 hours before the signing. And when I arrived, not only was Paul Molitor still in full swing, but the Carew line was already 15 or so folks deep. Was it necessary to get there so early? I don't know. What I do know is I scored Rod's auto (Twins fans call players by their first names, not "Mr. So-and-so" which for a southerner is weird, but I can learn), and that made the trip a success. 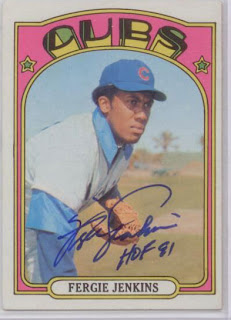 Part of that 4 hours was spent finding a '72 Fergie Jenkins to have signed at the Fergie Jenkins Foundation booth. I'd seen this card online and thought it looked perfect for an auto. I searched around and struck up a conversation with a cool dealer about some vintage he had. He didn't have this card on hand, but said to come back in 30 minutes. I did, and for $2 he handed it over. The added bonus to all of this, of course, was meeting Mr. Jenkins, who'd happened to have brought along some friends. 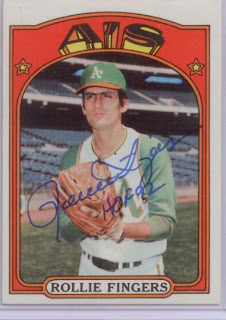 The 4th HOFer I got to sign a card that day, Rollie Fingers. The uni, the pre-mustache Rollie, the psychedelic tombstone, what more could you ask for? 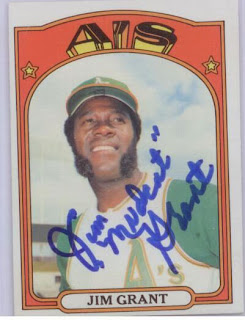 How about one more auto, Mudcat Grant sporting some of the most amazing muttonchops you'll ever see on a man. He saw this, laughed, and turned to Mr. Fingers, saying something about how awesome the early 70s A's were style-wise. I then asked about where "Mudcat" came from (apparently because people thought he was from Mississippi), to which Mr. Fingers said, "If they'd known you were from Florida it would have been dolphin, 'Dolphin Grant.'"

Anyway, Saturday was so awesome I wasn't too bummed about missing Sunday due to incoming weather (it's a 5-hour drive to where I live). All the same, I not only got my two big guys, but also three more amazing ones in addition to a few current Twins.