This is THE card I've been chasing since I got back in to collecting. 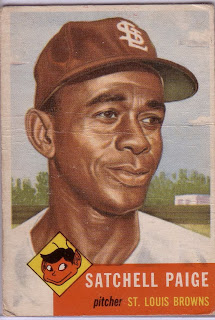 What can you say? The man was a legend, by which I mean his greatest exploits are not "officially" recognized by MLB because they are not "verifiable" by league-approved means. I get it, I really do. Despite the lack of "official" stats, no one from that era disputes Satch's prowess. His team barnstormed with that of Bob Feller. His dominance of Josh Gibson, perhaps the greatest home run hitter of all-time, is amazing. What sealed it for me, though, is his take on why you don't eat fried foods: they angry up the blood. This of course is very, very true.
As and aside, a while back I even got a chance to shake hands with Larry LeGrande who was Satchel's last catcher on the Satchel Paige All-Stars. All I can say is if you get the chance to meet Mr. LeGrande at a game you need to GO. 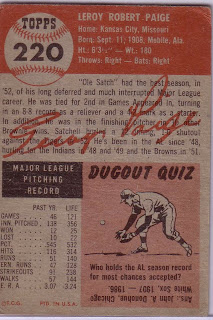