Yesterday I was fortunate to be able to head down to the Joe (where the Riverdogs play) for the official SAL AS fanfest. I will admit: I wasn't there for the video games, jump castles, or slides, just the autos and a chance to talk to a player or two.

The players came in on a parade led by bagpipers from the police department. Honestly, they really made a big deal of it, which was cool. I'm always shocked there aren't more folks at these evens, even if it's only A-ball, but the compa (who came with) reminded me that real people work. The point is well taken.

Anyway, there's a good local-news report here. At around the 38 second point there's even a clip of yours truly showing off my cards (at that point unsigned!) for the camera.

Here are some of the cards afterwards: 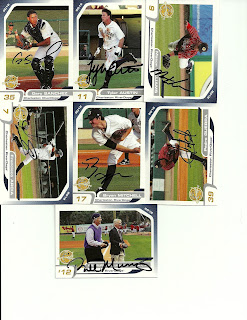 And yes, that bottom card IS Bill Murray, who was in attendance. He's part-owner and officially the Director of Fun. That mostly means he shows up and does Bill Murray things like this. When we met him he was singing Adele and encouraged us to go tarp sliding during a rain delay should the opportunity ever arise. I pointed out we'd get arrested, but he didn't seem to think that was a problem. In an alternate reality I'm already pondering how the "Bill Murray Defense" would hold up in court.

Other highlights:
Telling Braves prospect David Filak I enjoyed watching him pitch back on May 20. That game was the Evan Rutckyj rules the world game (8K in 5 IP) and Filak only allowed 2 ER. Great pitching matchup.

Also got to chat up Riverdogs Mason Williams  for a sec and asked if he really is related to Walt "No Neck" Willams. Turns out he is.

And finally, getting to tell Delino DeShields, Jr. how much I loved watching his dad back in the day. Having come of age in early-90s baseball, there were fewer guys this side of Rickey Henderson more exciting than Sr. He even signed one of my two AS balls right on the sweet spot. Very cool!

In total, with the compa's help I got signed Riverdogs cards for myself and the proprietor of The Lost Collector, as well as two AS Logo SAL balls that have the signatures of both North and South teams between the two of them. Overall a great day!

Posted by Carl Crawford Cards at 7:48 AM