Wait, you were hit twice?: TTM from Tom Saffell

As I revise my book MS the compa let me take on a special ttm project for the summer to keep my mind occupied: writing men listed in the list of the 100 oldest MLB players, limited to guys who have some sort of cardboard icon out there. It gives me a focus to obsess about, prevents me from drowning in the open-ended process of revisions that do not have an open-ended deadline, and gives me a solid excuse to walk out to the mailbox and clear my thoughts every hour or so.

The latest success came courtesy of Mr. Tom Saffell. He had a four-year MLB career with the Pirates and KC-A's, compiling a slash line of .238/.293/.216. However, he played in the minors until his 40s (even rambling through my neck of the woods in ND in 1962!) and managed into the 1970's. He's got a great bio up at the SABR project, so I'll let that speak for itself. Apparently he's also something of a baseball collector!

So, here's the 1951 Bowman Mr. Saffell signed for me. The scan is super-high res, so the actual card isn't as washed out as it looks: 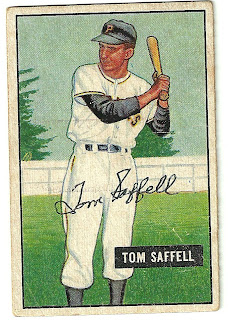 And I was particularly excited to see if he'd write me after I read the back: 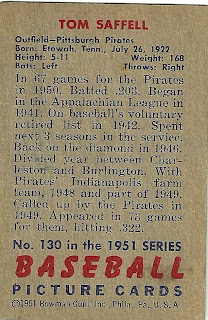 Yep, he spent time down here in Charleston, SC. And he DID write!

His best moment in the game was taking the field for the first time with the Prirates at Wrigley Field against the Cubs in 1949.

And what does he remember most about his time down here in Charleston?


That must be a record of some sort, but it's certainly something memorable! And when you think about it, it demonstrates that Mr. Saffell was a tough-as-nails kind of player. Hit twice in the head breaking up double plays in the same game? That's a guy who's definitely putting winning above all else.

And speaking of hard-nosed baseball, he was a hard-nosed manager as well, incurring a 30-game suspension for not allowing his team to play the day after a bad call cost them a game there the night prior. Have you ever heard of that? I asked him why no one does that anymore:


A great response on a lot of levels. Today's managers get ejected as a show, but I think he's right that the high salaries prevent them from really making a point. And the umpires? They're also better today!