Now that I'm more settled I'm editing my manuscript for publication. This entails a set work schedule in which I've included time to blog and send out an obscene amount of ttms. Otherwise I'd go crazy. You know what they say about work, Jack, and being a dull boy.

I've had the addy for awhile, but recently took the plunge and wrote to the one and only Pumpsie Green. Despite the mythology I'd like to believe about Green, teammate Gene Conley, and an ill-fated attempt to reach enlightenment on a pilgrimage to Jerusalem, the raw data of the matter concern two men stuck in traffic on a team bus and a desire to go AWOL and have a few drinks. 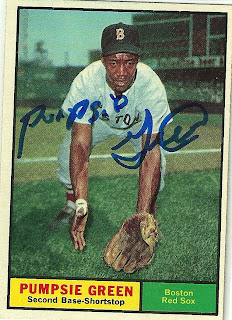 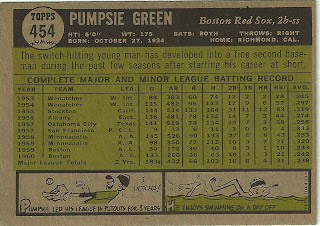 As you read the back of his 1961 card, you'll notice something is missing, namely the fact that when Mr. Green took the field for the Sox in 1959 he did so as the first black player in Sox history. (His 1960 card also omits this fact) Yep: over a decade after Jackie Robinson broke baseball's color barrier, the Sox still had no African-American players. Rather than diss the Sox further, I'll just point you to a scathing 2002 NPR piece on the backstory.

Green himself was characterized as a "reluctant pioneer" in this milb article, which I found a fairly straightforward reminder of how history is often thrust upon folks who really aren't that different from the rest of us. Indeed, all Pumpsie wanted to do was be a ball player, be accomplished as a ball player, a guy for whom baseball was fun and not so much a matter of professionalization.

And so it is fun, hopefully a lot more today than it was 60 years ago. With that I'll get the day started. Have a good one everybody and goodnight Pumpsie Green, wherever you are (even though I know you live in El Cerritos, CA!).