The SAL HR Derby was Where?

The rumors are true. It WAS on a decommissioned aircraft carrier. My hometown rag has a good write-up here. It was cool but also very strange. There was no way to tell what would/wouldn't count as a HR, and as it turns out it was only the first round. Who knew? But the event was incredibly well organized and, well, was on an aircraft carrier! 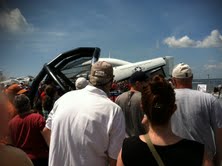 I'm obviously not one of the paid photogs, but this will kind of give you an idea. There were boats, jet skis, and Coast Guard out in the harbor to collect the balls.

The most awesome thing was just mingling with the players. I didn't try for any autos b/c there's a special fanfest tomorrow for that, but it was awesome to just see them hanging out. A lot of them were non-AS just there to support their teammates, there were a number of girlfriends and wives, a number of parents. After the derby we were all just kind of up there in the afternoon sky.

On the way out I grabbed this pic of players for the WV Power heading out. 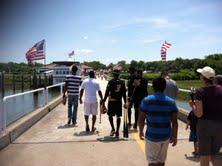 As you can tell, in single-A you gotta carry your own bats to and from the derby! Bet it's not like that in the majors.


Posted by Carl Crawford Cards at 7:00 AM