Starting with a big shout out to 30-Year Old Cardboard for sharing info on the signing in the post here.

For post #500 (something of a milestone in cardblogging I guess) I thought I'd roll out the Jim Rice auto I scored through the paid signing 30YO mentioned on his site. The price was WAAAY beyond what I usually shell out for autos because a) it was more than $5 and b) I can be tight with cash, but I got the compa's permission. I wanted this not because Rice is a HOFer but because he's from Anderson, SC, and being from SC myself I'm always on the lookout to connect with Carolina ballplayers. So, with no further ado: 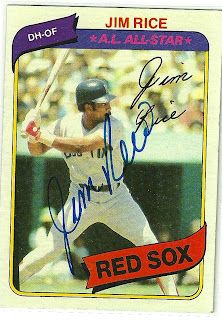 The 500th post is a big deal, so who better to put up today than HOFer Mr. Rice? He gets a ton of crap from some analysts (not enough walks, only led the league twice in RBI, three times in HR, never THE man in the league, etc.), but he was a HELL of a ballplayer in the offensively challenged 70s and 80s. For me the legacy of those decades is skewed by the steroid era that followed them, so his accomplishments more than justify inclusion.

Back in the saddle around here. Have a good one everybody and goodnight Pumpsie Green, wherever you are!