Check the group break here. Some great teams have come open (Cubs, Reds) with more to come.
After me previous ttms from Mr. Williams I had to give it one more go with the 1968. It's his second card but first as the only player featured and sports the classic Topps Rookie All-Star Team trophy, none of this little cup stuff they went to in the 1980's. 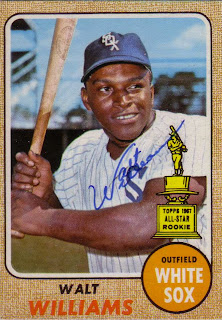 Just for context, that dude is 5'6" and has some serious Hulk Hogan style pythons. David Eckstein, by comparison, is 5'7".
"No Neck" had a solid 10-year career playing for the White Sox, Yankees, Indians, and Colt .45's, amassing a 91 OPS+ as an OF and pinch hitter. He's obviously also got one of the classic baseball nicknames and a great signature with a single large "W" serving to cover his first and last names.
This card is pretty sweet. Williams looks like he's 12 despite sporting those massive biceps. The wry smile, however, kind of hints he knows a lot more than he's letting on, that he already knows he's going on to a good career. 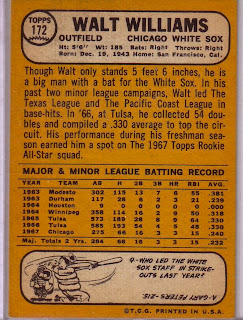 I also like the fact that he played in Durham and had no idea about that until I got this one. He also played in Winnipeg, which is only about 3 hours from here. That may be a lot to you, but out here that's practically next door.
And those names bring me to one last point: I miss the days of far-flung baseball outfits scattered across North America.  The minors used to be a LOT bigger, and the journey through them a LOT longer. I'm heading out to my first Independent League game today to see former Cubs farmhand Nic Jackson tear it up. Still out there, chasing the dream.
Have a good one everybody and goodnight Pumpsie Green, wherever you are!
Posted by Carl Crawford Cards at 8:55 AM