Get Rich or Die Tryin': Cards for 50 Cent

On my way back from Mexico I stopped in Iowa at Daddy D's house with the compa. D always takes me to the local card shops, one of which has some AMAZING bargain boxes and cheap relics.  I've struck out there a few times but I've come away with some nice finds at other. This was one of those times.
I've even considered grabbing this card before, at whatever plus $3 shipping, but always held off. Then it turned up...for 50 cents. 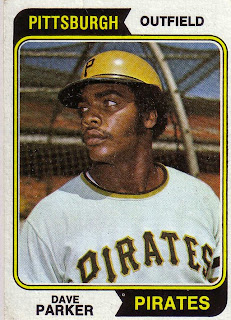 Dave Parker, the winner of one of the World's Baddest Man contests over at Night Owl's place. This card has a TON to like: the gaudy yellow helmet, the batting cages, the former 14th round draft pick with the hint of an afro glancing to his right. Incredible card, sort of like the evil version of Dave Winfield's card from the same year. Definitely a card fit for a dude who should be a HOFer according to most of the Bill James sniff tests. Dude was underrated and an absolute monster. In fact, picking up this card inspired me to grab another one....that'll be coming up shortly.
Have a good one!
Posted by Carl Crawford Cards at 8:00 AM