From the Sandlot: Delmon makes Good

The card here comes courtesy of the recent giveaway over at The Sandlot. 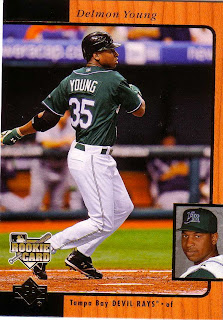 I collect Delmon Young's cards. I haven't catalogued what I have and put it on the blog, but I am an fan going back to when I saw him in Charleston and Durham. I cringed with everyone else when he did this and, sadly enough, agreed with the decision to trade him and give him a fresh start elsewhere (as a side note, the ENTIRE D-Bulls coaching staff was replaced after that season). Immense talent, talent that is really coming through this year in a big way to the tune of a 140 OPS+. Like with Upton it's hard to forget Delmon isn't yet 25 because he's been around so long. Last year a lot of Twins fans were calling the trade a bust but this year folks are singing a different tune. Glad to see he's starting to cash in!
True story: the only ball I ever got at a game fell to me one afternoon in Durham when Delmon was in right. It was the day game of a day/night double header to make up for a previous rainout, so next to no one was there. My friend Fer and I were in the OF, drinking beers, watching the game, and waiting for our wives to show up for the second game (and drive us home afterward), when former mega-prospect Gookie Dawkins hit a ground rule double that Delmon barely missed and that, coincidentally, popped into the stands right in front of us. Taking the ball was very weird, almost like doing something sacrilegious. I almost expected someone to come take it from me. Anyway, that was the one and only ball and how it's connected to Delmon. I might have him sign it at the next Twinsfest, which would be pretty cool.
Anyway, have a good one and goodnight Pumpsie Green, wherever you are!
Posted by Carl Crawford Cards at 7:15 PM