A while back Troll did a great post on former Negro Leaguer and Big Leaguer Chuck Harmon. I'm a sucker for Negro League ballplayers and ttms, so when I saw that Mr. Harmon has his own website I thought "Sure, I'll drop him a line." He's also the man who integrated the Reds, which makes his story particularly cool.

Months went by and no reply. My success rate on ttms is pretty good and, to be honest, I hold no grudge against the guys who never reply or return the cards. After all, they have no idea who I am and I'm intruding on their daily routines with a letter seeking a signature and, in the case of Mr. Harmon, a sheet of paper with the question: "What is the secret to a successful marriage?" He's been married over 50 years so it seemed appropriate.

Well the mail showed up Friday and these were in the SASE: 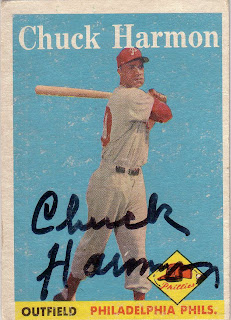 That card is courtesy of Daddy D, sig courtesy of Mr. Harmon. I really like the card itself as well. Most 58's are close-up portraits which makes this posed batting shot somewhat unusual. And of course there's that nice phat signature on there. Great stuff. I'd forgotten how much I enjoy getting vintage cards from former players back in the mail and haven't sent any in months. Gotta do something about that.
Anyway, this was included as a bonus: 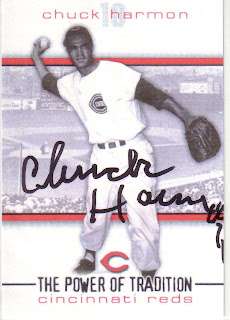 I dig how the signature kinda got away from him but Mr. Harmon picked it up, going on down the card. The back is also pretty neat with a narrative about his career and popularity in his town, Cincinnati. 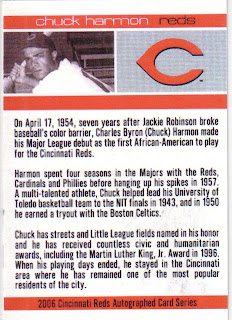 On top of this he even answered my question about marriage. The answer: "marry the right person." That's pure zen.
Have a good one everybody and goodnight Pumpsie Green, wherever you are!
Posted by Carl Crawford Cards at 8:00 AM 2 comments:

Details here.
Posted by Carl Crawford Cards at 11:53 AM No comments:

Holy Crop: This is How It's Done

Don't forget: we have the 5 box Bowman Chrome Break coming up. LOTS of teams available, sign up here.

Night Owl has done several definitive posts on cropping, but when I got my cards from the JC Break in the mail this afternoon I had to throw this out there. 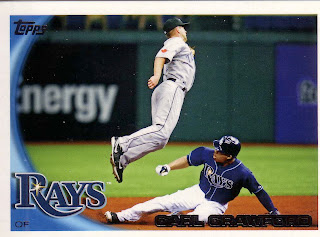 Good photo but not great. I appreciate the action shot, the signage on the outfield wall, but there's just not enough for a solid narrative. Again: good card, I like the action, but it's not great.
Then we have 2010 Topps Chrome: 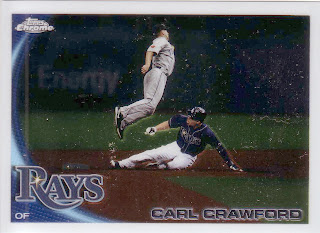 The Chrome doesn't show up well on the scan but check that out. You've got the base about a foot from CC sliding in, a shadow cast behind him, the sign in the background reading "Energy." Darn right! And well done to whomever decided to take a step back on this one and revise the card for the Chrome issue. Very, very nice.
Have a good one everybody and goodnight Pumpsie Green, wherever you are!
Posted by Carl Crawford Cards at 8:00 AM No comments:

CCC Group Break: Twins, Both Sox, Mariners Many Others Available

Click here for details!
Posted by Carl Crawford Cards at 8:00 AM No comments:

We're going back to the Trop!

In other news don't forget the CCC Group break. 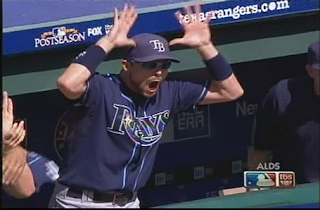 It looks like Sonny is in it to be the new Jonny Gomes. Peña has returned from exile, Longo is back (although limping), hopefully CC can shake off the terrible strike calls from last night and get back into it. Game ball to Wade Davis---he came up HUGE today. Let's see Price do likewise on Tuesday!
Posted by Carl Crawford Cards at 5:37 PM 1 comment:

CCC Group Break: Twins, Both Sox, Mariners Many Others Available

Click here for details!
Posted by Carl Crawford Cards at 1:37 PM No comments:

Will the real Tampa Bay Rays...

please show up! C'mon guys. Despite my best-laid plans it looks like I'll be in for the long haul on this one in some airport bar. Delayed flight mean I'm already in a bad enough mood, so let me go home happy!

Go Rays!
Posted by Carl Crawford Cards at 10:30 AM No comments:

As many words as total hits:
That sucks

Go here for pricing and the rest of the available teams. 5 boxes of 2010 Bowman Chrome!
Posted by Carl Crawford Cards at 8:55 AM No comments:

Go here for pricing and the rest of the available teams. 5 boxes of 2010 Bowman Chrome!
Posted by Carl Crawford Cards at 8:00 AM No comments:

This one is for the Royals fans

You know who you are.

This was a largely meaningless series for the Royals at the end of a lost season but the Royals absolutely gave the Rays all they could handle in earning the split. And then you had Mitch Maier (or however you spell it) working Soriano for a walk with 2 outs in the bottom of the 12th, then Yost pinch-hitting Blanco for Dyson, then Blanco with the double. I know the Royals finally have some depth in the minors, but a team that battles into extras on the last day of the season isn't too far away from turning it around. I know all the clichés about waiting til next year but seriously, the Royals look ready to make some noise.

Go Rays!
Posted by Carl Crawford Cards at 8:00 AM 3 comments:

Congrats gentlemen. Now let's finish off the Royals game and do some damage in the postseason.
Posted by Carl Crawford Cards at 3:49 PM 2 comments:

Many thanks to Eric Patterson of the Boston Red Sox for helping make this day possible.

Wade Davis takes the hill for the Rays against Sean O'Sullivan and the Royals. Longo is STILL out but hey, this year it's about winning the whole thing, not necessarily the division. Though, truth be told, I'd love to win us some division.

As reported in other sources, if CC hits another HR today (his 20th) he'd going the exclusive 20/40 club. This is interesting in a Trivial Pursuit, alignment of the stars kind of way, but not in a way that's statistically meaningful. Dude's had a great year with a high in power and consistently good speed. What more can I say?

And speaking of CC, anyone catch the in-game video of him discussing the GG? You could hear the frustration in his voice just talking about it. Seriously, how long can AL managers overlook him? CC's biggest problem has always been hype, that is lack of it. The stats are there, no doubt. 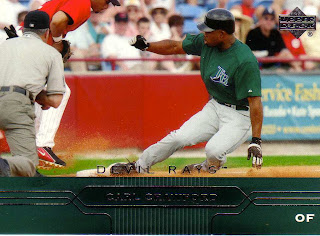 Have a good one everybody. Go Rays!
Posted by Carl Crawford Cards at 11:26 AM 1 comment:

Update on the Oct/Nov Group Break scheduled for this afternoon. All systems go!
Truth be told watching the Rays the past few nights has been tough but, as the title implies, this is as much a problem with my expectations as with the Rays' performance. I think the Rays should go out and ROLL the O's and KC, especially guys like Millwood and Chen, but they got shut out. Why knows why? My grief has a lot  more to do with what I expect at this point in the season versus what I expected in March. If you had told me then the Rays would have been assured a playoff spot and be battling for the Division Title on the last weekend of the season I'd have said, "Bring it on!" Of course now that those things have come to pass I'm greedy. I want them to win it all and do so now, $$@$ it!

As linguistic monkeys we're a lot like that as a species. We won't admit it but we expect things despite the fact outcomes may/may not be uncertain. We might say we plan for the worst and hope for the best but, more often than not, we entertain thoughts of the worst to inoculate us against it actually happening, as if fantasizing about a worst case scenario somehow assured us that it would never happen.

Which leads me finally to this: I want to apologize to all the folks with whom I've been in and out of touch over the past couple of months, group break participants in particular. I'm sure this is too much info, especially for a blog on baseball cards, but the compa had a miscarriage a couple of months ago. It was one of those events where, even though we both knew there are no guarantees a given pregnancy will come to term, the expectation was, of course, that it would. We were pretty unprepared for a negative outcome and it's taken me these months to get my head back straight.

Good news, of course, is that I'm back! Things are good, I'm catching up on business, looking forward to the postseason and getting back to things.