Things have been nuts, but should only be like that for another week or so. I've moved (temporarily) across the country, and am slowly getting back into the order of things should be go to go late next week. There are a few emails I haven;t responded to yet (sorry!) but I'll get there.

Anyway, I'm back in my hometown for awhile and, like most of us, the first thing I did when hitting the area was goole card shops. When I left (in 1994) there were none left. Thankfully, one apparently opened up in 1995 and is still going strong. The need for an oil change gave me the perfect excuse to check out Hooked on Cards. I'll give a rundown of the store later (nice little place with a friendly owner!), but wanted to showcase this gem I picked up while there, an 1955 Bowman Clint Courtney, the latest update in the Catchers Finding Jesus series. 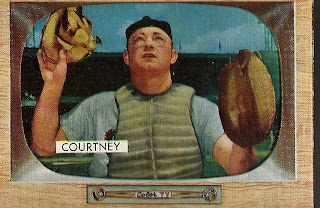 What's that? Something's amiss? You're right. Not only is this catcher finding Jesus, he's also wearing glasses. He's definitely one of the first catchers to don spectacles, and at least one source has him as THE first.

But don't let that fool you. His nicknames were "Scrap Iron" and "The Toy Bulldog," both of which make sense for a guy who caught, wore glasses, and stood all of 5' 8".  He was, apparently, a natural lefty who taught himself to catch right-handed, robbing the world of another in the line of distinguished left-handed catchers. He was also, according to Wikipedia, myopic.

Sporting News ROY in 1952 and an original Oriole, he had a solid 11-year career, but as his nicknames would lead you to believe he's best remembered for being an all-out ass kicker. Wikipedia, BR Bullpen, and The Baseball Library all dedicate significant verbiage to his brawls, fights, and fines. Even his obituary mentions the endless fines he received for on-field shenanigans. Seriously, check out those links for details on some of the fights. They're good stuff. WWJD, indeed.

Great surprise card to find during a brief stopover. Have a good one everybody and goodnight Pumpsie Green, wherever you are!