but the Rays won! Heading out now to catch the day/night double header in the rain and snow and cold. No matter, go Rays!
Posted by Carl Crawford Cards at 8:34 AM No comments:

Heading out for the games!

Check out this video of Durham Bull Mark Ekstrom. You won't regret it.
Posted by Carl Crawford Cards at 12:18 PM 1 comment:

and I got tickets to the COMPLETE Rays/Twins tilt, including tomorrow and the doubleheader Thursday. On Thursday keep an eye out for the dude in the Durham Bulls jersey near the Rays dugout---I wouldn't know him!
Posted by Carl Crawford Cards at 5:55 PM No comments: 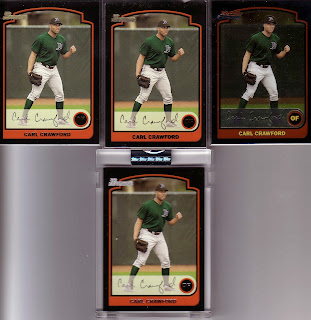 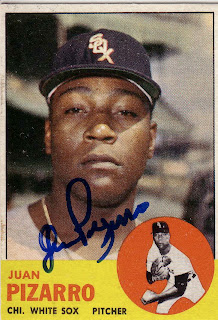 No question why I sent this card in to be the 1963 entry in the Topps 1951-present ttm project. It screams "I'm a bad man." Although he was only a 2x All-Star, Pizarro was a bad dude. Braves fans still remember his time with the club in the late 1950s when he came up as a flame throwing lefty the sportswriter Terry Garcia called "El látigo de ébano" 'The Ebony Whip.' I'd say that's pretty bad.
He remained a big K guy during his 18-year career during which he compiled a 104 ERA+ and a 131-105 WL record. 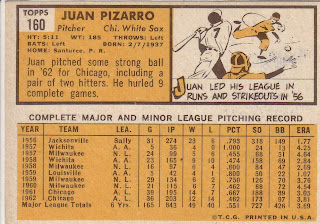 According to the questionnaire he was kind enough to fill out, his favorite player growing up was another boriquén legend, Rubén Gomez. His best memory from his time in the Majors was going to back-to-back WS with the Braves in '57 and '58.
My favorite was his answer for his toughest batter to strike out. The answer: they were all tough. Pretty humble from a guy with 1522 career Ks.
Have a good one everybody and goodnight Pumpsie Green, wherever you are!
Posted by Carl Crawford Cards at 8:00 AM No comments:

we're now at 3-8, no longer in last place. Love how the announcers insisted the Sawx are about to turn it around at any moment while the Rays are just treading water. Great job Price! Go Rays!
Posted by Carl Crawford Cards at 9:08 PM No comments:

I caved and got MLB Extra Innings. This will be the best summer EVAH!!!
Posted by Carl Crawford Cards at 4:48 PM 1 comment: 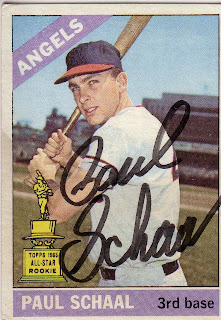 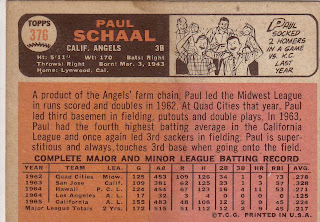 Schaal was also kind enough to send in one of the cooler player memories I've received. When asked about his best moment on the diamond, he said that one batter before him, Freddie Patek had homered. The pitcher, an infamous headhunter (do some research, he'd be easy to finger) tried to hit Schaal when he came up and knocked him down. Schaal put the next pitch in the seats for back-to-back HRs!
The best part: after "retiring" Schaal went back to school to become a chiropractor. Cool stuff.
Have a good one everybody and goodnight Pumpsie Green, wherever you are!
Posted by Carl Crawford Cards at 8:00 AM 1 comment:

At least through the third inning.
Posted by Carl Crawford Cards at 7:14 PM 1 comment:

Clemente asks: What is it all for?

Like pretty much everyone else, I've always loved this card of Roberto Clemente. 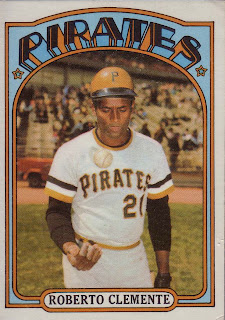 Were his juggling skills really so great that they deserved to be immortalized on cardboard? Did the photographer consciously set out to make one of the most iconic cards of one of the most iconic players of all-time? The expression is timeless. Roberto, lost deep in thought, tossing a baseball.
I've been there for the past week. One of my favorite Bulls, Elliot Johnson, made the big club out of the gate. The Rays looked to have a solid if unflashy roster set for the title defense. Things were good.
But then the optimism and anticipation of the new season quickly gave way to despair for Rays fans. After today we're 1-8. From there things just look worse and worse. Longo is on the DL. No one expected Manny to set the world on fire, but he just decided "to be Manny" and retire rather than face a lifetime ban for using banned substances. Several players are pushing, not performing to the level they are capable. Maddon got himself ejected today, which will hopefully get everyone to loosen up. There are plenty of games left. 153 to be exact.
Meanwhile in Boston...CC is also not performing to expectations. For a game they even moved him to near the bottom of the order. Ugh.
At least Gomes is murdering the ball in Cincy.
Have a good one everybody and goodnight Pumpsie Green, wherever you are!
Posted by Carl Crawford Cards at 8:00 AM 3 comments:

at least Maddon is out there losing his mind at the umps.

Hopefully that'll get us turned around!
Posted by Carl Crawford Cards at 2:41 PM No comments:

One of the cooler things about TTM autos is they make you start investigating the careers of players you otherwise might not have known about. In short it gives you a deeper appreciation of the game and how good some of the non-famous players really were. For me, Gary Peters is one of those guys. 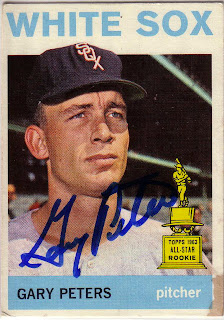 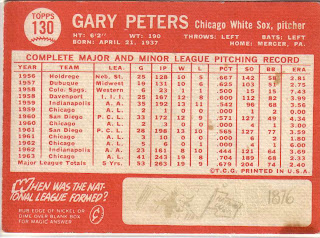 While this isn't the RC (that's a 1960 Topps card) it's a sweet card with a dour Peters on the front. I guess you'd be pretty dour, too, if in '63 you finally stuck in the Majors after 7 years in the minors.
Speaking of, the Rays are now at 0-4 after a loss to the Angels tonight. Ugh. Gotta gettem tomorrow, boys!
Have a good one everybody and good night Pumpsie Green, wherever you are!
Posted by Carl Crawford Cards at 8:00 AM 4 comments:

There are some pretty good on-deck shots out there (Longo's UD Masterpieces card comes to mind) but there can be none cooler than the 1980 Ed Kranepool. 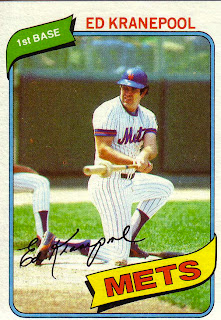 As for irony: Kranepool is on-deck but this is the last year of his 18-year career with the Metropolitans. Although he's about to bat, Kranepool's looking back over towards the dugout, like he's showing the youngsters how it's done. Only he's not swinging the bat. Rather, it looks like he's using it for sword practice or something. Strange, strange stuff. If you've got a letter on-deck card I'd love to see it!
Have a good one everybody and good night Pumpsie Green, wherever you are!
Posted by Carl Crawford Cards at 8:00 AM 1 comment:

just go away.
Posted by Carl Crawford Cards at 8:17 PM No comments:

Like the rest of you I've been swimming in an orgy of long-awaited baseball games since Thursday. The older I get it seems the time between the WS and Spring Training gets longer and longer. Anyway, on to the cards!
I picked this card up as a part of my Topps Rookie AS Team effort. Ed "The Poet" Charles had an 8-season career from 1962-9, with a lifetime BA of .263 and a respectable OPS+ of 103. Now, if an 8-year career sounds pretty short, consider that Mr. Charles broke in to the Majors at 29 after 10 years in the Braves organization. That's pretty remarkable.
And the nickname? That was given to him by Joe McGuff of the KC Star after McGuff read some poems Charles had written. 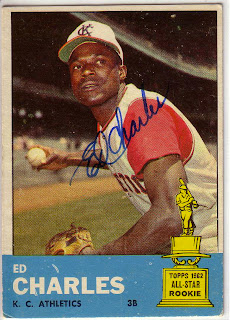 As for the card, I like how the trophy takes the place of the inset photo in the card design. It does look kind of out of place, though, with the other '63s. The picture itself is an odd closeup of a posed action shot, but I really like that Charles is tilted back slightly. The tilt gives a strange dynamism to to the card and naturally leads your eyes to the cavernous stadium in the background. All together, it makes you believe this is a fresh face now in the BIG TIME. 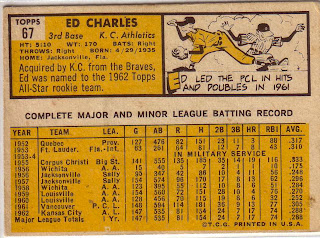 The minor league stats on the back are great. Makes you wonder how some guys get promoted while others fall through the cracks.
So here's to perseverance! Here's to a new season!
Have a good one everybody and good night Pumpsie Green, wherever you are!
Posted by Carl Crawford Cards at 8:00 AM No comments: