Jeff Niemann says it all: Blech!

Ever had one of those days? Jeff Niemann has: 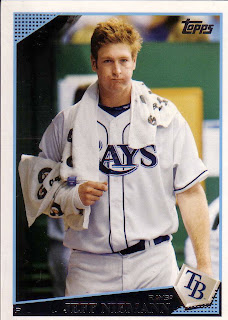 My man Elliot Johnson gets injured the same night I post about him throwing me a ball.
Then tonight the Rays get 6 runs (SIX runs!) off of Justin Verlander, only to lose 7-6 to SMG's Tigers. AND they dropped the lead in the AL-East.
When it rains it POURS!
At least the new Walking Dead comes out this morning. Zombies!
Have a good one everybody and goodnight Pumpsie Green, wherever you are!
Posted by Carl Crawford Cards at 8:00 AM No comments: 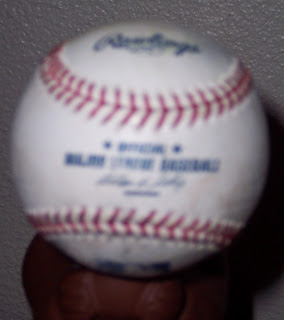 Have a good one everybody and good night Pumpsie Green, wherever you are!
Posted by Carl Crawford Cards at 8:00 AM No comments:

Getting back in the swing: ttm from The Chairman of the Board

I'm slowly catching up on emails (you know who you are!) and the second half of the Twins/Rays tilt post is coming.

Until then, here's a quick ttm success I had a while back: 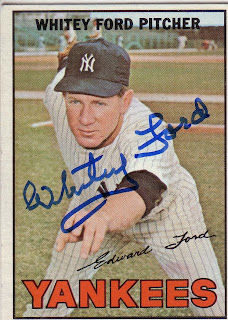 The card is from a reader, Brian, with whom I traded a while back. I was able to help him out with some needs and he randomly included some unsolicited cards (along with a cowbell) in return. Since I'm working on a Topps auto project and Whitey is a consistent signer (for $20), I decided to send it out.
Have a good one everybody and good night Pumpsie Green, wherever you are!
Posted by Carl Crawford Cards at 8:00 AM 3 comments:

Game 2: Straight to the Good Stuff

I'm skipping game 1. Not because it wasn't great (Rays won!), but because it was so cold no one remembered to take pictures. In case you missed it, it was SNOWED during the game.

The next day started out not so promising. 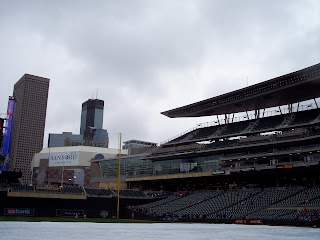 Clouds in the sky, tarp on the field. And raining. And cold.
Compa and a friend who came with us got beers and, like sensible people, stayed under cover to keep warm.
Since we never get to games I sprung for front row tickets next to the visitor's dugout. 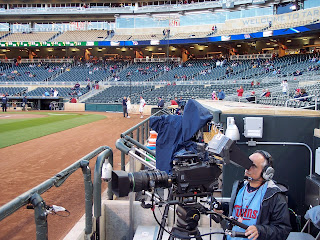 I know, not the best shot, but I swear that you can see players beyond the cameras from time to time! Besides, this being the Rays in MN, there were some interesting characters down there waiting for the players to come out.
There was guy and his two kids up from Des Moines to see Hellickson pitch. He said he'd played in an over-35 league with Helly's dad and had nothing but good things to say about the Rays prospect. The ushers were coming around and kicking people out of there but since compa wasn't there and those WERE our seats I told them to stick with me and I'd vouch for them if anyone asked. Long story short, Helly did come out on his way to the pen and the guy and his kids DID get to shake his hand. Pretty cool.
Compa and friend came back and we settled in when one of our all-time favorite Durham Bulls, Elliot Johnson, came out to warm up. This is where things get goofy.
Elliot had made the team out of spring training this year, which was a pretty big deal as far as we were concerned. Appropriately enough we'd made a sign for Elliot saying "Congrats," which was promptly pulled out. He was gracious about the whole thing and yelled over, "Congratulations for what?" When we replied, "For making the team out of spring training!" he ran over and spoke with us for a few minutes until the National Anthem.
He asked us about being Durham fans and, when we told him we'd recently moved up North here from NC, without missing a beat he said, "That sucks." Good stuff.
Well, I had an old Durham jersey I was wearing to the game and had brought a pen just in case Elliot was around. He seemed surprised someone would ask him to sign a jersey that obviously wasn't his number (the jersey is #14, he's #9; he even flipped it over to see whose name was on the back---there's no name!), but I was THRILLED. He said, "Well, I was 14 in 2007." 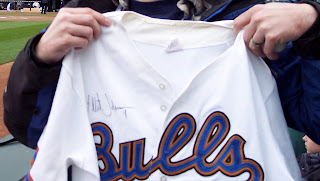 Not seen: the massive sh!t-eating grin I've got on.
Thanks Elliot! This was very, very cool, and the non-game highlight of the trip until what happened a few minutes later, but that'll be for tomorrow.
Have a good one everybody and goodnight Pumpsie Green, wherever you are!
Posted by Carl Crawford Cards at 8:00 AM No comments:

2 days in April: Seeing the Rays kick some butt

I took a road trip to see the Rays hopefully win some games against the Twins (they did!). They were my first games in 2 years, so I was stoked to be there. So, picks and the 411 coming over the next few days! 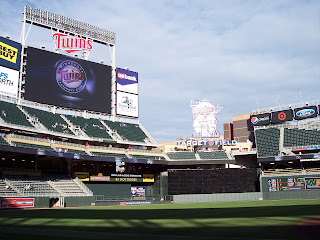 This was day 2, after the sun a had cleared a bit. The Wednesday night game was almost unbearable, but Thursday more than made up for it!
If you are in the area Target Field is well worth the visit. Clean lines, friendly field, altogether a nice place to take in a game (so long as it's above 40 degrees).
Posted by Carl Crawford Cards at 5:59 PM No comments: