Mounds View Meet Up with GCRL

Last week I hinted that I picked up something cool at the little show in Mounds View, MN, where I had the privilege of meeting another blogger, GCRL, in person. It's kind of weird to use the word "privilege" but let's face it: we're all busy, we all have things to do. We might be near/in the same area, but stories of bloggers meeting up aren't as common as you'd think they would be. At any rate, he took the time to come out, I took the time to stop, it was cool I hope that next time I have more minutes on my hands so we can talk some more shop!

At any rate, he said several time (and in his post!) that he was bummed the show was so small and that the vintage guy wasn't there. Still, it was a show, and it's been awhile since I've been to one. Next one on my neck of the woods will be...in February.

Not to be deterred, as I headed out there was a guy with a few autos from the 2001 Fleer Greats of the Game set, among them this one: 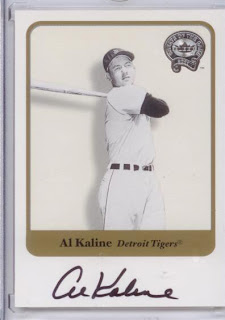 Marked $25 I offered him $20, we both walked away happy. It was a small show, but I'd put scoring a Kaline on-card auto for that is a nice score.

Anyway, thanks again, Jim. And thanks for the info on upcoming shows in the Twin Cities!

and somehow THAT's the constant. The teams don't even stay the same (hello Nat's, goodbye Expos), much less the players.

The October 2 post on former-Ray Fernando Perez's tumblr feed gave me a good laugh. Birds crapping all over everything, particularly advanced metrics (have you seen Baltimore's run differential!), and tonight the Rays season. (But seriously, major ups to the O's. Now go kick some ass.)

As for Fer, he was one of the great Durham Bulls I loved watching back in grad school. As a graduate of Columbia University he was also, truth be told, the kind of player a dorked-out grad school baseball fan could really get behind. At one point other orgs thought highly enough of him that he was included in the Matt Garza trade, going over to the Cubs in exchange for a ton of prospects. Sadly, as his twitter feed reads, he's out of a job. Guess that means he's no longer one of MLB's working poor, but it's bottom of the barrel 47%. Or something like that. Guess that's how most poets end up.

With the Rays out of the hunt, thoughts have turned to who'll no longer be with the club next year. BJ is gone. Someone (Price? Hellickson? Shields? Niemann?) from the starting staff will be traded. When the Rays traded Garza I was bummed to lose a great pitcher, but losing Fer, a speedster in the CC, BJ, and DJ mold, was what hurt. I simply enjoyed watching the guy, and he was another link to the great Durham teams I watched as a finished up grad school. 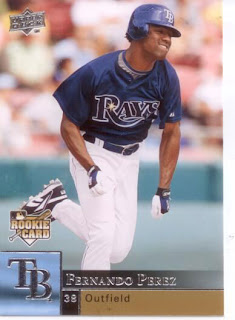 When the compa got her PhD last year I asked him to give me a retweet from the patron saint of educated ballplayers. His response was to say, "I think that's Canseco." Miss seeing you play, 'nando. Hope things are treating you well.

Posted by Carl Crawford Cards at 8:00 AM No comments:

It's later at night than I normally like it to be when I nod off, but I'm still grading after a great weekend away with the compa. Heck, I even met a fellow blogger GCRL IN PERSON, which was way cool. Added bonus was I got to give him an overdue trade package, which saved me a few ducats. Anyway, more on that later. 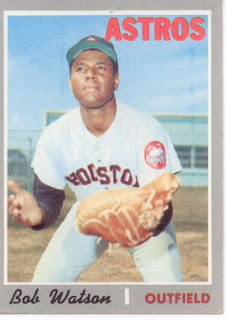 Technically he's not listed as a catcher here, but his 1969 card lists him as a C/OF, so he did know the position. According to BB reference, Bull even played a total of 10 games at catcher in a 17-year career, a full 1 of them (a whopping 2 innings worth!) in 1969.

But here, on this card, he's listed as an OF and appears to be posing as if he were catching a pop-up (or witnessing the second coming of Christ), while wearing a catcher's mitt. And seriously: who needs Jesus more than a catcher who, inexplicably, has gone in to play the OF with his catcher's mitt? The ball is in the air, it's coming in his direction, and yes, he'll need divine intervention for this to come out right.

Indeed, who among us hasn't been the metaphorical Bob Watson?