CC to the Sawx: My definitive Opinion

It's been a while. Hope everyone's had a great Holiday Season and looking forward to sending things out with a bang tomorrow night.

First off, the end of last semester was way too hectic. I'm behind on trade responses, keeping up with blogs, and things in general. Then I was in Mexico for two weeks.

And while all that was going on, this happened. 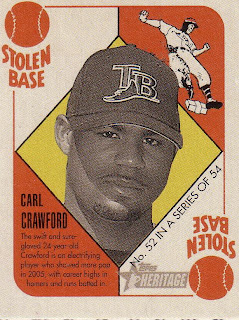 To be honest I'd already gone through the seven stages of grief about CC leaving the Rays. At this point, a number of the guys I watched come up from Charleston to Durham (CC, Young, Gomes) are gone, so I've been here before. Would I rather CC have stayed with the Rays? Unequivocally. But that's like saying you wish you could stay 23 and single forever: not gonna happen (at least for the 23 part). I'll still pull for the Rays (particularly with Elliot Johnson finally scheduled to come up next year) but it's a different team.

Organizationally it was the right move. The Rays can't afford anything near the 7 years/ $142 million CC is scheduled to get from the Sawx. They'll get some compensatory picks in return and the wheels will keep moving. Sad, but that's small market.

As for CC, I'm glad he's getting his. He was professional about the breakup (both its inevitability and its resolution) and will receive a much deserved payday. His knees also get out of the Trop, which was becoming a concern.

As for ME,  at least it's not the Yankis. I know, it's the Sawx (that's the mini-Yankis) but it's still not the Yankis. Bloggers aside (whom all-in-all are a great group), Yankis fans are #1 on my list of "folks I don't like to watch a game around." Sawx fans are #2, sure, but it's a distant #2. I can pull for the Sawx to be successful with CC in ways that just wouldn't be possible if he were employed by Hal, Hank, and Cash and being rooted for by the meandering bandwagon that comprises 95% of Yanki fandom.

In fact, as a preferred destination for CC the Sawx are probably the BEST of all possible worlds for him, career wise. The Halos would have been nice but they're not in a position to contend year after year either talent-wise or financially. If nothing else the Sawx are gonna hit, especially with González at 1B, so CC's offensive stats should soar. To borrow a phrase from Joe, who email me about this subject, going to the Sawx will be boom or bust: it'll put him over the top for the HOF or ruin his career. We'll see, but there's a lot of potential there.

Have a good one and goodnight Pumpsie Green, wherever you are!
Posted by Carl Crawford Cards at 6:13 PM No comments:

It's Official: CC no longer a Ray

I'm happy CC is getting his as they say. 7 years and $142 million is nothing to sneeze at and money  the Rays couldn't afford.

AND it's not the Yankis (even though it's still the Sox). And even though it's the Sox they now have CC and Andrew Miller, two of my favorite guys, so I guess I can go there.

At any rate it's a strange day. I just hope that if Gene Conley and Pumpsie Green invite CC out for drinks he politely declines.
Posted by Carl Crawford Cards at 8:16 AM No comments: