Things are good but busy.

I've been selling a lot on ebay recently with an eye towards making one big purchase, a "purchase of the summer" if you will. I even had a target on this card, a 2001 Fleer Stitches in Time Willie Mays auto. Yep, auction is over, but don't congratulate me.

I was looking at making this card a new cornerstone of my collection and eventually completing a Stitches in Time master set. Naturally, I looked up a checklist online. Then I saw this post over at Sports Card Info. Yep, apparently Mays DIDN'T sign for that set even though Fleer printed up the cards. Some, however, made it out the back door as evidenced from this auction.

In short, there are "Wille Mays certified auto cards" circulating that have no auto on them. This is a DISASTER and, if I can believe my eyes, a big moneymaker for someone. As far as I can tell these don't pop up too often but the seller who sold the Mays card I was going to buy also sold one in December, listed here. Anyone could get duped and sell a fake auto this legit. "A" fake auto, not two or more of them.

Major props to SCI for saving me a lot of cash and grief. I'd have been bummed if I'd fallen into this.

Stay safe out there, everybody!

I'll be at the Rays games in Baltimore this week, if you're watching that'll be my cowbell.
Posted by Carl Crawford Cards at 12:49 PM 1 comment: 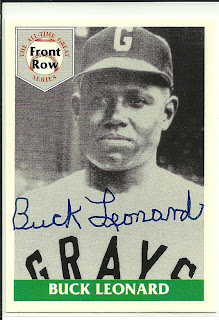 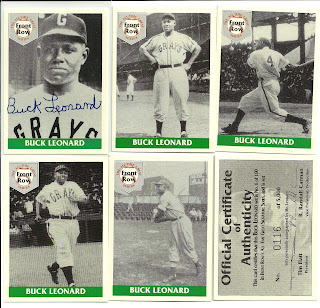 Have a good one everybody and goodnight Pumpsie Green, wherever you are!
Posted by Carl Crawford Cards at 7:00 AM No comments:

Alex Remington over at Fangraphs had a tremendous article earlier this month on Larry Doby and the official integration of the American League on July 5, 1947. Doby's legacy is being celebrated around these parts this week during this weekend's series, presumably because 14 was Doby's number and this Saturday will be July 14.

To join in the spirit and honor a ballplayer from my home state, CCC will be focusing on the Negro Leagues for the next few days.
Posted by Carl Crawford Cards at 3:38 PM No comments:

Actually it's Greg Z over here. He's a finalist in a Beckett contest for a Koufax auto. Vote early, vote often, do it for the blogosphere!
Posted by Carl Crawford Cards at 6:04 PM No comments:

At a yard sale yesterday I hit one of those "everything must go"-type bb card collection sales. Most everything is from 95-present, but among other cards I've found are a 84 Mattingly RC and a Donzell McDonald RC (he's Darnell's brother, and I watched him play in Mexico).

Beyond that there's mid-90s UD, a ton of Bowman Heritage, and other stuff I'll get to when I can.

At any rate, get your lists out. This promises to be random, but if you cover shipping I'll trade you/sell you what you need for cheap!
Posted by Carl Crawford Cards at 8:17 AM 4 comments: