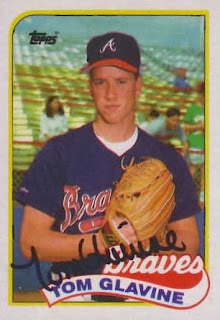 A while back I was talking to a good friend of mine about the different teams we follow. He's from LA and a die-hard Dodgers fan. When free agency came up he said that he was team first players second, and that seeing different players depart the team didn't pain him all that much. I owe him a lot, because that's the moment I realized my fandom is player first, team second. Tom Glavine has always been one of my players, and I guess that his departure breaks the last tie I had with the Braves teams of my youth.
See, although my family travelled to many a Braves game in the dark era of the 80's, I guess you could say I was a "fan" but not a fan. That changed when, in 1989, the Braves sent a group of young players (+ Dale Muphy, who arrived to late for me to see him that day) on a tour of the South. This turned out to be the single coolest moment of my 12 year-old's existence. The only thing I knew about them was that the one guy I recognized as the person they got in the Doyle Alexander trade, which if you were a Braves fan in 1989 looked pretty bad on the part of the Braves as Alexander went a ridiculous 9-0 with a 1.53 ERA to close out the season. 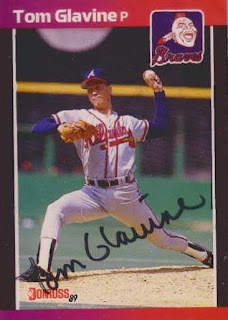 1989 would be another losing season, but I hung on every pitch with Tommy Gregg, Pete Smith, John Smoltz, and Tom Glavine. I wasn't picked to go meet them and get their autographs, but a kid near me was. He must have been really cool, because he took a stack of baseball cards up for me, and the Glavine autos here are from that stack. These two cards predate the division championships and the series runs, and they were signed by a guy who had tied for the league lead in losses the year before. I guess that hearing the news yesterday that he had been released pretty much does it for me as a Braves fan. It's like a lot of relationships one has over the years where the crossing of a pivotal juncture means that the relationship, though still ongoing, will forever onward only be a shadow of its former self. I'll watch the Braves, I'll follow them, but I guess I'll never be a fan again like I am a fan of Tom Glavine.
Posted by Carl Crawford Cards at 8:23 AM