So, the wife and I were so busy running around and enjoying ourselves at Twins autograph-stock we overshot the mark to get in the Harmon Killebrew line. We got there a full HOUR before he was scheduled to sign, but Twins fans are as serious about their Killebrew as they are about their Mauers and Morneaus. Harmon is also a big talker who likes to speak with everyone, which significantly affects his autos per minute.

No worries, though. After weighing our options for about 45 minutes we bolted for another line.

First up, Dick Stigman, a  1961 Topps Rookie award winner as voted on by the youth of America. He was also an All-Star his first year in the bigs, as voted on by whoever used to decide such things before the intertoobs and "vote early/vote up to 20x." What's that? Dick Stigman signed with a BIC?! Dick Stigman is so old school he laughs at your fancy markers and mint 10s. Bar the door, Katy, Stigman will show you how they rolled back in the day. (And yes, I did have a heart attack when he did this, but this obviously wasn't Dick's first rodeo) 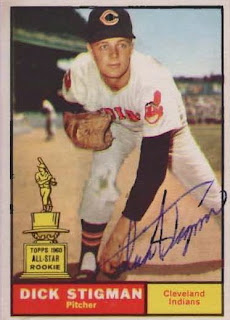 Sitting next to Stigman, Julio Becquer. Here's an awesome article on Becquer (found on Baseball reference). We forget that players are also people as caught up in events as we are, as powerless as we are over the events that shape their lives. In 1961, the year after this card was produced, Becquer and other Cuban ballplayers saw their lives radically changed due to Cold War politics.

His might be my favorite auto from the day. He's got this fantastic, mobius strip like signature that winds its way across the card. I was in utter awe as he worked on it. Then he scratched his number in the bottom right corner and I guess he sensed I was puzzled because he said, "You know, so you don't have to turn that card over for the number." (!) 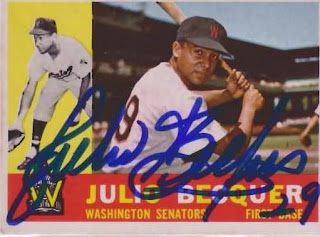 And finally, the man, Tony Oliva. This is also an awesome card, but what's more important was the signing. Oliva is a smooth, smooth guy who was enjoying himself, relaxing in the June heat and eating a bag of mini-donuts. I hand him the card and he turns to my wife, standing clear of the line off to his left, and says, "Would you like the last donut?" Wife: "I'm fine." Tony O: "C'mon, it's got your name on it..."

That pretty much did it for my compa. Thank God he's got me by a few years, because my spouse now has a huge crush on Tony Oliva. We talked about the donut episode the whole way home. Very, very cool. 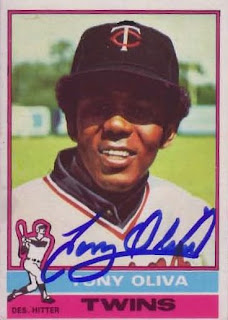