The Most Wonderful Time of Year

At least it used to be. When I was a student I LOVED finals week. Not because I was a great student (I wasn't) but because the semester was over and I could relax a bit, take a few tests that cramming would do me no good on anyway, and mail it in.
Things are different from the other side of the desk. I get emails asking about grades. Ridiculous emails about assignments that were due months ago and if it's too late to get them in. Emails that, in any other context, are more poorly written than spam. This is the time of year for taking your lumps and reaping what fruits you have coming to you, not for waking up after 16 weeks of coma and trying to squeeze 1000 years of knowledge into your head in 24 hours.
Take Amos Otis here. 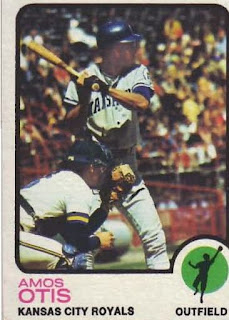 Amos hit the bigs at 20 with the New York Mets in 1967 and pretty much crapped out. He got a another shot two years later in '69 and, once again, crapped out. He got sent to KC and, well, in 1970 made the first of his 5 AS appearances over the span of a 17 year career. You gotta take your lumps but be honest about it. No crap. I wonder what turned Amos Otis around. I'm sure it wasn't a lot of griping about bad breaks, bad calls, and sleeping in for who knows how many straight days.
Have a good one everybody and goodnight Pumpsie Green, wherever you are!
Posted by Carl Crawford Cards at 6:36 PM