The proprietor of A Noboru Auto Fan's Notes had a proposal a few months ago. Seems a friend of his at work is a big Twins fan and really wanted a ticket from game 163 at the Metrodome. In exchange? The friend would send me a CC jersey card.

I had no ticket, but did have an extra program. Laziness on my part prevented me from sending the program on down. Things remained in the air until I scored a Keith Hernandez jersey to send down. That got everybody moving.

So, I netted the CC jersey AND these: 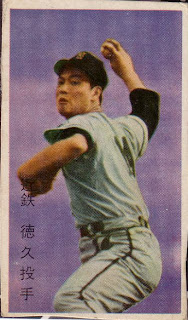 First, a 1964 Toshiaki Tokuhisa, ROY for the Kinetetsu Buffaloes. This is my second Japanese card as Noboru gave me an Aki Japanese card before I left NC. And let me tell you, this is awesome. It's halfway between the size of a regular baseball card and an A & G mini, on great card stock, and is absolutely badass. I really like the purple cloud background and the placement of the Kanji near the left border. The back: 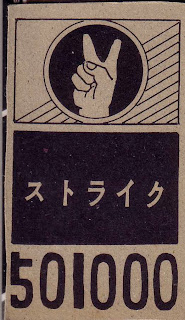 I know: wha?!? If I remember correctly it's a game and Japanese cards started including stats, etc. in the 1980's or thereabouts. Different, got it's own thing going on no doubt.
And then: 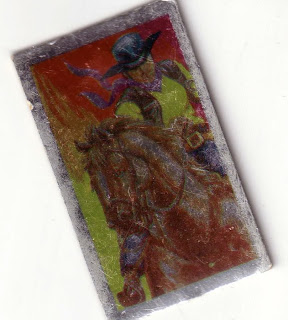 Crazy foil shiny cowboy also from the 1960's. No IDEA what's going on in this one.
Thanks again for hooking up the trade Noboru, and regards to your coworker. I'll have the CC jersey up soon!
Have a good one everybody and goodnight Pumpsie Green, wherever you are!
Posted by Carl Crawford Cards at 7:13 PM