Hat Trick: Cards from Our Friend under the Bridge

A while back I sent Troll a slabbed CC auto, and in his words "he'd been looking to get me back." After this package I'm in the position of looking to even up the score. 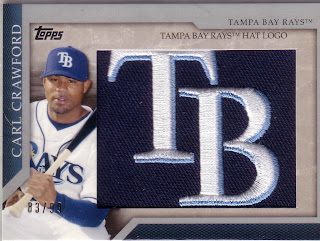 I know a lot of folks are ambivalent about the manu-patches, and in a lot of contexts I'm right there with them. That said, these hat patch logo cards are pretty sweet. I don't feel that the overall effect is quite as canned as with the letter patches, and the team logo is pretty badass. I even think the design is well-done given the amount of info they manage to get on the card in a limited amount of space. A+ and badass, great addition to the CC stash. Many thanks Troll! 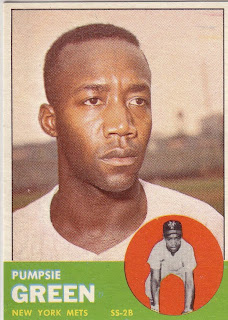 Then we've got this SWEET Pumpsie Green. I know Green is a significant player for a lot of reasons, but my favorite this about him is that he and Gene Conley were partners in crime in one of the better modern baseball stories out there. Whatever the details of the actual story, I like the idea of Green and Conley wandering the earth, going from bar to bar trying to get to Jerusalem.

The card itself is everything you could ask for out of early '60s Topps. A recently traded player with no hat (Pumpsie moved from the Red Sox to the Mets), and a horribly airbrushed inset action shot. Speaking of hat logos, the "NY" on Pumpsies lid looks to weigh about 15 lbs or so.

And finally, a small selection of the other goodness Troll sent up my way: 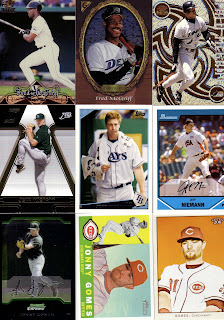 Freds, Jeffs, and Jonnys, all new and going straight into the PC.
Many thanks again, Troll! Keep your eyes peeled tomorrow for a very special "Catchers Finding Jesus."
Have a good one everybody and goodnight Pumpsie Green, wherever you are!
Posted by Carl Crawford Cards at 11:54 AM