Juan from the Midwest from Ike's Cards

I'm finally back in action. Kinda. Until compa gets back tomorrow night, with Daddy D arriving shortly thereafter, and then I'm leaving the country on Friday. No causality there folks, I swear.

First people I owe a trade post to: Ike's cards. This turned out to be one of those trades that was A LOT more than I had bargained for, which spurred me to make another trade that also went WAY better than I'd expected that I'll get to tomorrow. This was the initial lead: 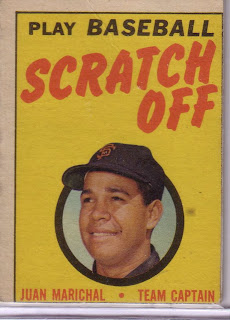 Juan Marichal is officially team Captain of my Chingones fantasy baseball teams.On the one hand, he's a HOF pitcher who had an amazing career. Everyone knows the rest of the story. You just don't mess with this guy.
Then Ike's cards said they had a Rocco jersey, and was I interested. Sure. 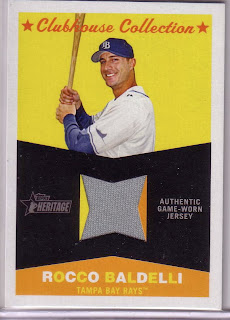 What could have been, right? Great player derailed by illness. He can still hit, and I hope he catches on as a DH somewhere.
And then this is just a smattering of the TON of Rays they threw in: 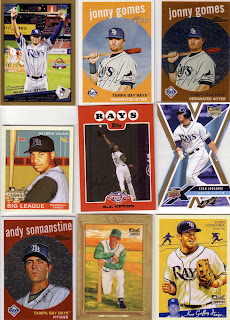 CC gold of one of my favorite cards and two Gomes I've been secretly coveting. And riddle me this: why does the Longoria Goudey have Jeter's pic but clearly state, "Ken Griffey says..."? Were the proofreaders at UD first to go?
Thanks again for the awesome trade!
Have a good one everybody and goodnight Pumpsie Green, wherever you are!
Posted by Carl Crawford Cards at 7:54 PM