This Man Will Save Your Team: Starring Nick Esasky as Jesus Christ

First, don't forget to check out the group break SMG and I are putting together, here. 13 teams left!
If you followed the Braves at all in the late 80s and early 90s, where do you begin the story of Nick Esasky? In 1990 he was coming off a career year in Boston with 30 HR, a .277 AVG, and a 133 OPS+. He was going to SAVE a franchise that was badly in need of some saving. 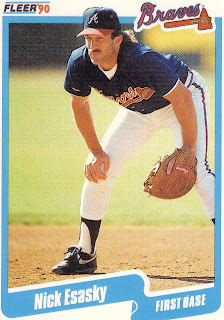 Sadly things did not turn out that way. At. All. In something that could only happen to the Braves around that time, Nick arrived in the ATL, developed an ear infection that lead to him developing vertigo, and basically never played again. He was in 9 games in 1990 and NONE thereafter. That's some snake-bit luck for a snake-bit team. It's also terribly unfortunate for a guy who was coming off a career year and seemed to be hitting stride in his prime.
This card is another one courtesy of Tribe Cards. It's a 1990 Fleer, so my first thought is it's gotta be airbrushed or EARLY spring training 1990. There's nothing obvious about the photo's quality, so I'm guessing the latter. It would also have to be RIGHT before the vertigo incident, if only because it derailed him early in spring training so that there was pretty much never a question of Esasky's playing. Pretty weird.

Have a good one everybody and goodnight Pumpsie Green, wherever you are!
Posted by Carl Crawford Cards at 9:36 AM