Once again, please check here for info on the group break. For those bloggers who have signed up, if you'd drop a mention on your blog that's be awesome! Props to JC, who's been awesome supporting SMG and me in all of this!

First, I'm running a bit behind at the moment. My compa is out of town doing grad school stuff and I have been all alone for most of the week. You'd think it'd mean I'd be posting a lot more and getting scans done from my awesome trades lately, but no...

So I bring you the second card Walt Williams was kind enough to sign for me. 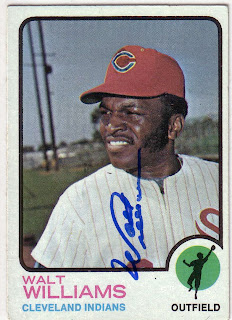 If you have the 1968 Walt Williams RC contact me: you have me over a barrel and I HAVE to acquire that card. As for this card, shoot, where does one start?
We've got the vertically oriented auto, which I find different and very cool. It only reinforces my opinion that Walt Williams is AWESOME. Other just sign. Williams signs with panache.
And then the card itself...I mean WOW. It's one of those great Topps airbrush jobs that, despite Photoshop and billions of dollars, persist. That hat is radioactive. The "C" for "Cleveland" pertains to no font known to man. And then, to top it all off, no one thought to airbrush out the pinstripes on the uni or the massive "S" for "Sox"on the left side of the jersey. It's almost like Topps wanted to represent Walt mid-trade, between teams, neither fully of one or the other. Thanks again Mr. Williams!
Have a good one everybody, and don't forget to sign up for the group break. And good night Pumpsie Green, wherever you are!
Posted by Carl Crawford Cards at 5:11 PM